Some wags may suggest that compiling the 2012-13 Second Division Team of the Year should be a relatively straightforward task. “Just stick the entire Queen of the South XI in there and be done with it!” they might yell. And in theory, they could have a point. After all, how many players in the league could legitimately get a game in Allan Johnston’s side? One? Two? A handful, even? There wouldn’t be many, that’s for sure.

Although Queen of the South have enjoyed a wonderful season, many of their players have been marked by a collective excellence rather than a personal one. Nevertheless, six members of their famous squad have been selected – the Doonhamers almost exclusively make up this team’s defence – with the remaining positions filled by players who have all had outstanding campaigns.

Indeed, these players have been picked on the basis of their individual achievements over the course of the year – whether or not these players could play together cohesively is irrelevant. This season, in this author’s opinion at least, these have been the Second Division’s best players in their respective positions. 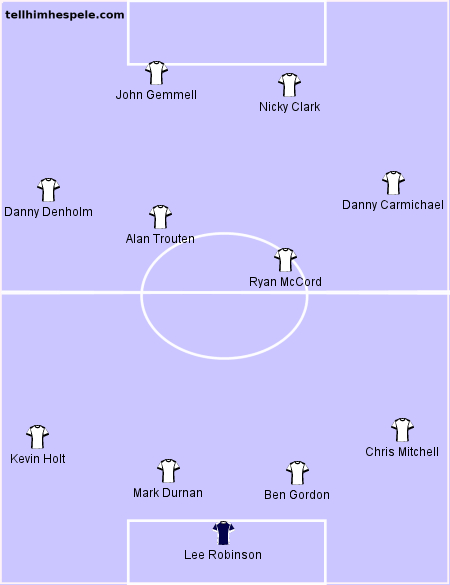 There are a number of fine goalkeepers in the division – in the near future, Stranraer’s David Mitchell is likely to “do a Gaston” and move to an upwardly mobile full-time club, while Alloa Athletic’s Scott Bain will star in Division One next term – but no-one has quite captured the imagination like Queen of the South’s Lee Robinson. The calibre of his league performances alone make him a worthy candidate (the Doonhamers conceded just 23 goals as they marched towards the title) but it was his outstanding displays in the Ramsdens Cup that marked him as a goalkeeper of distinction.

In Queen of the South’s quarter-final tie against Rangers at Ibrox, it was their goalkeeper who pushed away Dean Shiels’s penalty kick to help his side win the shoot-out and progress. And in April’s final with Partick Thistle, he would repeat these heroics by blocking Aaron Muirhead’s 119th minute spot-kick (although Thistle would score moments later). With the match to be settled by another shoot-out, Robinson’s contribution was once again decisive – he scored himself, saved Conrad Balatoni’s poor effort and ensured his side won the cup.

Is there another player in the SFL with the same devastating ability from set-pieces than Chris Mitchell? His contribution with the dead ball – in terms of both goals and assists – is a vital commodity and at his best, there are times when Mitchell just looks too good for the division.

Following his release from Bradford last summer, the player pitched up at Palmerston and immediately impressed. An accomplished two-footed defender, his versatility has been important over the season – on a number of occasions, Mitchell has been asked to deputise in midfield and at left-back. This selflessness – and of course, his talent – will be crucial to Queens’ successful assimilation into the First Division next year.

Outwith Queen of the South, there are a number of excellent part-time centre-backs in Division Two: Brechin City’s Graham Hay added steel to Ray McKinnon’s team; Scot Buist and Ross McMillan played well throughout Stenhousemuir’s underwhelming season; Stuart Malcolm was a strong presence for Arbroath; and Frank McKeown did his best to hold Stranraer’s porous defence together.

It is Alloa Athletic’s Player of the Year, however, who makes it into this team. Ben Gordon has quietly matured from a rugged stopper into a cerebral, all-round defender equally comfortable crashing through opponents as he is with the ball at his feet. Pound for pound and on current form, Gordon is arguably the best part-time centre-back in the country. How he acquits himself in the First Division next term will be interesting and the step up will be a challenge the player will surely relish.

In truth, either one of Chris Higgins or Mark Durnan could have been selected for this team but it is the latter’s emergence as one of the SFL’s best young centre-backs which earns him his inclusion. Durnan was signed following his release from St Johnstone (a move which seemed a little ill-judged on behalf of the Perth club) and quickly assimilated into the Second Division. At ease in the air and on the ground, his prowess is such that Craig Reid’s departure to Greenock Morton has not been felt at all.

Still raw, Durnan has learned from Higgins and developed over the course of the season – he will become a strong asset in the forthcoming campaign. The Saintees’ loss in Queens’ gain.

Although there is a dearth of quality left full-backs in the Second Division, it would be wrong to suggest that Kevin Holt’s position within this team is purely by default. Having been used sparingly by Gus MacPherson last season, Holt has emerged as a player with the potential to develop into a quality defender. Suspension and loss of form saw the player drop to the bench for a brief period but on the whole, the season has seen the player quickly mature.

Naturally left-footed and combining physicality with pure athleticism, how he progresses next year will be fascinating. Having piqued the interest of Hibernian, a move to bigger things appears likely.

The most unpredictable, skilful winger in the division, Danny Carmichael has developed a fine understanding with his full-back Chris Mitchell and has turned the Queen of the South right flank into a fearsome prospect for any opposition defender. Carmichael combines pace and acceleration with excellent control and his offensive raids have tended to be profitable.

Although he has an occasional tendency to drift in and out of matches (a condition which appears to afflict all wingers) like so many of his team-mates, Carmichael has enjoyed a stellar campaign.

In a time when central midfielders are expected to fulfil very specific roles (fancy terms such as the regista, the mediano or the trequartista, for instance), it is refreshing to see Ryan McCord bound across the pitch with such abandon. An old-fashioned, all action box-to-box midfielder, the former Dundee United trainee has enjoyed a superb season with Alloa Athletic.

His goalscoring ability – 11 goals from the middle of the park – has impressed (with many of the strikes coming from distance) but it is his range of passing, both short of long, is which is his most remarkable talent. McCord is adept at dictating the tempo, keeping possession for his team, and instigating swift counter attacks. There are few other midfielders in the division who boast his energy and ability.

Formerly one of the SFL’s most precocious talents, Alan Trouten’s career appeared to have stalled. Underwhelming at both Clyde and Ayr United, the player continued to disappoint after joining Jim Weir’s side last term and drifted through an undistinguished season. Often incorrectly deployed on the flanks, it was only until the arrival of Ray McKinnon that the player flourished. Shifted infield and afforded an advanced midfield role, the 2012-13 campaign has been the best of Trouten’s career.

His return of 18 goals (a phenomenal achievement for a central midfielder) will have deservedly caught the eye but equally as impressive is Trouten’s technical ability – his delicious touch, close control and intelligence is perhaps unmatched by any other attacker in the division. In full flight, he is an outstanding talent.

Having agreed terms for next season, Trouten is the figure McKinnon will assemble his team around.

In many respects, Forfar Athletic’s Danny Denholm is the SFL’s signing of the season. Unheralded before his transfer from Stirling University, the winger has acquitted himself brilliantly to the league and was a key figure in the Loons’ assault on the promotion play-offs. Before joining Dick Campbell’s side, the player would have been virtually unknown to those outwith the East of Scotland Premier League where he was central to Stirling’s championship win the previous year.

Fast, direct and skilful, Denholm is equally as capable at creating opportunities as he is at scoring them – his record of ten goals in all competitions is remarkable, especially given Campbell has seen fit to shunt him into a number of unfamiliar positions over the course of the season. Even as Forfar’s campaign appeared to waver at times, Denholm’s performances still maintained a high level of consistency. A move to full-time football seems likely with Livingston reportedly interested in the player; he is still raw, but there is a great potential concerned within him.

Forty-one goals across a tremendous campaign make Nicky Clark the most obvious candidate for inclusion. Misused on the flanks by Gus MacPherson last term, the player has blossomed under Allan Johnston and has developed a reputation as one of the SFL’s best strikers. His two distinctive qualities – his pace and his finishing – have been too much for opposition defenders, and his ruthless streak saw him equal Jimmy Rutherford’s 80-year-old goal-scoring record. It should be noted that Clark is no flat-track bully – he has also scored against Greenock Morton, Hibernian, Kilmarnock and Partick Thistle.

It is unfortunate that Queen of the South will be unable to call upon his services next season following his defection to Rangers. Clark will be expected to make an immediate impact at his new club and McCoist must follow Johnston’s example by using the player in a central position to maximise his talent

Is there any team in the division this season who have relied on one player as much a Stenhousemuir have relied on John Gemmell? The Warriors’ talismanic forward has been in the finest form of his career and, on a personal level at least, has enjoyed a superb campaign. Leaner and fitter than at any point before, Gemmell has scored 18 goals in 24 league appearances, almost a third of his team’s total league goals for the season. The tally would no doubt have been greater had injury not precluded his participation for eight weeks of the season.

Penalties, headers, tap-ins, 30-yard piledrivers – at his best, Gemmell resembles someone playing Doom in God Mode. Combining brute force with an underrated technique, the player is capable of simultaneously bullying and bewitching opponents. A notoriously capricious character – his tempestuous streak can be a source of frustration – his performances this season have been the highlight of Stenhousemuir’s otherwise indifferent year.

Although Alloa Athletic’s consecutive promotions have marked Paul Hartley as one of the country’s most promising young managers, and Ray McKinnon has turned a faltering Brechin City into a fearsome team, it is Allan Johnston’s achievements at Queen of the South which earn him the coveted Manager of the Year award. Having been briefed at the beginning of the season with the task of ensuring the Doonhamers make an immediate return to the First Division, Johnston excelled.

Not only have his side secured the championship, they have completely obliterated the field and exceeded the expectations of the most fanciful supporter. Queen of the South are statistically the Second Division’s best ever team and the Ramsdens Cup holders – they are well placed to make an impressive impact on their return to the second tier. If Johnston is able to achieve the same relative levels of accomplishment next term, bigger clubs will take notice.

Many thanks must once again go to Pie and Bovril’s Skyline Drifter. A thoughtful, intelligent Queen of the South supporter, his analysis was vital in bringing the requisite levels of insight to this article.