IT was in the summer of 2011 that Gus MacPherson accepted the challenge of keeping Queen of the South in the First Division. The Doonhamers had let previous manager Kenny Brannigan go after his contract expired, seemingly as part of a programme of further budget cuts.

Losing established players including Derek Holmes, Rocco Quinn, Paul Burns, Willie McLaren, “Boab” Harris, Colin McMenamin and David Lilley meant that Queens had to re-structure the first-team squad on a larger scale than most would think ideal. The Queens sides of 2009-10 and 2010-11 flirted with promotion before having to settle for mid-table placings. Losing players of the quality and experience of those listed above meant MacPherson’s re-building job was going to be a difficult one.

Gus MacPherson arrived at Palmerston with a reputation built upon his relative success with St Mirren. He achieved promotion with the Paisley club in 2005-06 after finishing in second place in his first full season before. That team was built upon a solid 3-5-2 system: a no-nonsense philosophy in defence from Kirk Broadfoot and ‘Big Kev’ McGowne; creativity in midfield from the on-loan Charlie Adam; and a balanced ‘big-man, wee-man’ partnership up front with John Sutton and Stewart Kean. MacPherson consolidated St Mirren’s place in the SPL in subsequent years, despite nearly always flirting with relegation. MacPherson was made to leave the club 2010 by the St Mirren board who, looking for a fresh approach, went on to appoint Danny Lennon from Cowdenbeath. Nevertheless, MacPherson would have been proud of his managerial CV to that point. Queen of the South supporters seemed content with the appointment of MacPherson: a manager with experience of avoiding relegation and of winning in the First Division.

2011-12 was a season of ultimate failure, with Queen of the South relegated from the First after the penultimate match of the season. MacPherson left the club shortly afterwards, with Queens’ veteran midfielder Alan Johnston taking over for the final league match. The club were not a terrible side in 2011-12. They fought with Raith Rovers and Ayr United until the end of the season  (although it must be noted that Ayr were the only part-time team in the division), while almost pulling Greenock Morton into the relegation battle.

However, the 2011-12 season was the result of an imbalanced and unsettled first XI that continued making poor goal-conceding decisions throughout the league campaign.

This article is therefore an effort to look at five different league matches over the course of the season to try to better understand why Queen of the South finished bottom of the league. Greenock Morton arrived at Palmerston in the middle of September, sitting at the top of the league. Morton had recently enjoyed imperious score-lines of 8-0 away to Stranraer and 5-0 at Forfar in the opening rounds of the Ramsdens Cup and had thrashed Ayr United 4-1 at home only the weekend before. The win against Ayr would probably represent the end of the zenith of Morton’s achievements in the season; they went on to finish in eighth position, four points above Ayr.

Morton’s success at the time was built upon the fire-power of former St Johnstone forwards Andy Jackson and Peter MacDonald, with the latter averaging around a goal per game at that point in the season. On the wings were David O’Brien (who probably had the most productive season of his career and was Morton’s most impressive player over the campaign) and Paul Di Giacomo, who continued his tradition of starting the season well with a new team (scoring four goals against Stranraer) but fading quickly thereafter.

Morton’s team selection against Queens was typical of their season to that point. The only apparent anomaly would be the inclusion of Marc Smyth ahead of Fouad Bachirou in central midfield. Smyth – a natural centre-back – had filled in for Bachirou several matches previously and retained his place on merit after successive Morton victories.

Meanwhile, Queen of the South started the match second-bottom in the table (or joint-sixth, in another interpretation). After six rounds of matches, the notoriously competitive First Division table was still typically compact.

Queen of the South matched Greenock Morton with a 4-4-2 shape. The main contrast in approach by Queens was the use of play-making midfielders in wide areas, rather than wingers and wide forwards like Morton. Alan Johnston started on the left of the midfield, while Scott McLaughlin tucked in on the right. The same front six started in a 4-3-3 shape in a 1-0 win against Hamilton the previous week.

Two teams competing with 4-4-2 formations normally leads to the full-backs having important roles in an attacking sense. For both teams, the full-back positions were filled by more out-and-out defenders than attacking full-backs. Otherwise, one would presume that game-changing moments might come from moments of individual quality, errors or set-pieces. Indeed, this match had all three and Queen of the South found themselves 4-0 up at half-time.

All four of Queens’ goals were due to poor defending and goal-keeping on Greenock Morton’s part. The first goal, on twenty minutes, came from Queens’ centre-back Mark Campbell winning a header at the far post from an Alan Johnston corner. Campbell’s header was sent back across goal, with Keven Smith chesting and volleying home from close range. Smith was unopposed for his finish, on the edge and towards the centre of the six-yard box: an ominous sign for Morton. The second goal arrived after two successive crosses. The first cross from the right missed everyone (with Brighton falling over and claiming a penalty) and was then which was followed up the second from central midfielder Simmons, who found Brighton between two Morton centre-backs.

The third goal was calamitous and the second to be conceded from a set-piece. Smith lurked at the far post, where a Morton player (whom we suspect is David O’Brien, but it is difficult to be certain from video footage and highlights) was guarding the post. Smith pulled a run back from the far post for a free header, before aiming at the gap between the guarding defender and Colin Stewart in goal. The Morton player, who was meant to be guarding the far post, shirked his responsibility, taking a step behind the line. The space that was left was enough for Smith’s header to sneak over the line, in spite of Stewart’s desperate paw at the ball. It was reminiscent of Kieron Dyer’s step behind the line against Barcelona.

Stewart himself was entirely at fault for the fourth goal, letting a tame shot from outside the box slip through his hands and under his body. While the goalkeeper has been prone to similar errors throughout his career, in this instance the exceptionally slippy conditions – brought about by torrential rain at the beginning of the match – could at least provide a mitigating circumstance. 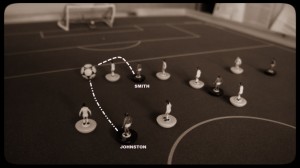 Despite the poor goalkeeping for the third goal, the pattern of the move leading up to the shot was indicative of the match. Alan Johnston continually drifted off the left-flank, in between the lines of the Morton midfield and defence, which gave him the space to play balls through to the forwards. This is precisely what occurred for the last goal. Johnston’s assist was the least he deserved for his play-making role during the match.

A score-line of four to one indicates a comprehensive victory.  Morton were not afraid to attack when they could, but were let down by their defensive mistakes. Morton tested Queen of the South’s defence considerably at times and it is notable that Queens were not entirely at ease defensively.

Morton created some good opportunities in the second half and ought to have reduced the deficit more than they did. 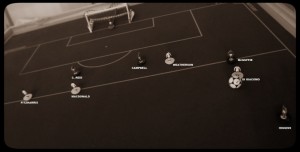 The picture above illustrates the shape of the back four in defending a Morton counter-attack. Queens’ left-back Higgins was too high up the pitch and was out-numbered on Morton’s right flank. Higgins was not in a position to prevent the low pass in-field to substitute Weatherson. The other three Queens defenders shifted to the left to compensate for Higgins’s position, which left space for Morton’s other sub Fitzharris to find space beyond Craig Reid at the far side of the play. Weatherson’s greed and mis-hit shot let Queen of the South off lightly, but had Fitzharris been given the ball then he would have likely scored from that position. 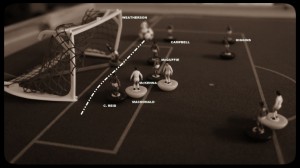 Another very good chance arrived for Peter MacDonald, with Higgins again being caught out of shape from the rest of his defence. Stephen McKenna fills in beside Campbell in this instance, but neither McKenna nor Reid at right-back could have prevented the goal had MacDonald met Weatherson’s cross from the bye-line successfully.

Morton eventually got a goal back through MacDonald but it came through a direct result of poor communication between the Queens centre-backs McGuffie and Campbell. The long ball forward towards Weatherson drew both centre-backs towards the Morton forward, which left a vacant space behind for MacDonald to run in to. With both Queens defenders realising that MacDonald was on their blind side, neither fully committed to the header and Weatherson won the contest. Weatherson flicked the ball to MacDonald and the striker finished strongly low into the right-hand corner of Stewart’s goal.

While Gus MacPherson would have been delighted at the score-line at the final whistle, he would have known that it was not the perfect performance. A defensive disaster by Greenock Morton in the first half gave Queen of the South the advantage to go on and win. Despite some promising play in the middle of the park, there were vulnerabilities from balls coming from the Queens left-hand side that could be exposed once again.