Derek Lyle scored a clinical goal that was set up by classic forward inter-changing between he and Nicky Clark.

Queen of the South started with the ball at the feet of their goalkeeper Lee Robinson. He passed the ball to Mark Durnan on the edge of the penalty box, who advanced a little before passing sideways to Ryan McGuffie at right-back.

McGuffie did not dwell on the ball for long and pinged a low pass towards Clark beyond the Albion half of the centre circle. Clark and Lyle were no more than eight yards apart and the angle of the pass allowed Clark to dummy controlling the ball, instead swivelling beyond his marker. Lyle, who was facing Clark and the incoming ball at all times, flicked the ball into Clark’s path in the outside right channel. Clark sprinted to the bye-line with the ball before cutting it back to Lyle, who was free to side-foot the ball into the net without Simon Marriot catching up with him.

One of the best aspects of the 4-4-2 system when it works well is the centre-forward partnership. There are too few obvious partnerships like it in the SFL, despite the ubiquity of 4-4-2. Peter MacDonald and Andy Jackson attempted similar moves for Morton last season, but the passing patterns never quite had the same execution as at Palmerston at the weekend. Lyle and Clark look a promising pairing and might pull apart a few more defences this season.

In terms of the build-up to this superb goal-line clearance by Alan Lithgow, the Jags played some of the best build-up football seen by these eyes in the SFL for a number of years. 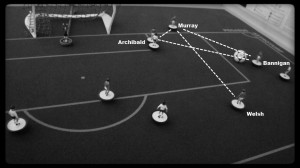 The move started with Hugh Murray being chased down at his own bye-line, but he remained composed enough to make a pass to Alan Archibald in the left centre-back position. Even with Murray’s momentum from the track-back taking him off the pitch, Thistle quickly formed a passing triangle around the defensive midfielder. Archibald played the ball quickly to Stuart Bannigan at left-back, who left a first-time lay-off for Murray to advance on to unopposed. Murray’s head was up and spotted Sean Welsh in deep midfield to make a 15 yard pass out of relative danger.

A passing triangle out of defence is not something typically associated with British football, let alone with teams in the SFL. The Jags players – despite being under enough pressure to otherwise justify the punt forward – never looked likely to lose the ball recklessly. 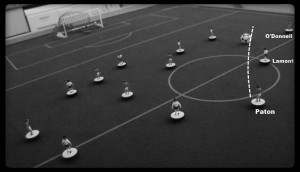 Some combination play between Welsh and Bannigan on the left side brought central midfielder Paul Paton into possession at the bottom of the centre circle. Paton instantly looked to switch the play further to the right flank and played a salacious pass on the inside of Mark Lamont to allow Thistle right-back Stephen O’Donnell to run at the Sons defence. 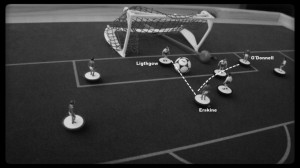 O’Donnell carried the ball forward at pace inside the box, dragging Dumbarton’s defence over with him. With Erskine, Steven Lawless and Kris Doolan all in a position for a cut-back from the bye-line, O’Donnell lured the Sons defence and goalkeeper ever closer to him before teeing up Erskine for the low drive into the goal.

However, Alan Lithgow read the play suitably to position himself in the centre of the goal-line. A brave diving block with the left leg was enough to parry the ball away for a corner-kick.

It was a wonderful save that a goalkeeper would have been praised for making and is all the more remarkable because an outfielder pulled it off.  Nevertheless, Erskine had the time and space to take a touch and aim for a low corner, which would have made an equivalent save implausible. The striker later redeemed himself with a similar finish from a cut-back.

It is very early in the season, but had that particular effort yielded a goal, it might well have been a prospective contender for goal of the season for 2012-13.

Thistle’s progressive football at Firhill might be hindered during the winter as the pitch condition worsens. Having professional rugby matches on the pitch in recent years has not helped Jackie McNamara’s cause, but with the Glasgow Warriors having moved on, perhaps the turf will not deteriorate in the same manner and Thistle will be able to still play the pretty yet pragmatic style of football used thus far.

In any event, the combination of passing triangles, switching of play across the flanks and direct running from midfield makes the current Partick Thistle team the best footballing side in the SFL since a Russell Latapy-inspired Falkirk of 2004-5, in this subjective opinion. While the pitches are good, it is worth taking the time to watch and enjoy McNamara’s long-term strategy developing.

Partick ThistleQueen of the South