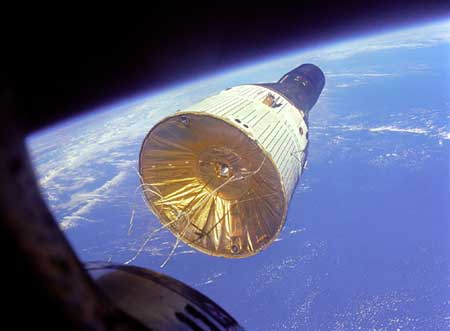 THERE were some notable goals throughout the SFL in the past weekend, but the largest collection of unforgettable strikes were concentrated in Cliftonhill as Stenhousemuir clawed back a draw in injury-time from what looked like a certain defeat to Albion Rovers.

Stenny manager Martyn Corrigan called his team’s defending “agony”. Nevertheless, Rovers’ forwards were on a similar level of form as the Warriors and a draw, on reflection, was a reasonable result.

Although this section focuses only on three goals, it is worth watching the whole highlights clip available. Like the most gripping sporting events – Nadal -vs- Federer at Wimbledon, The Ashes 2005, Chelsea -vs- Barcelona 2005 – one can grasp the sense of occasion and the height of drama where neither participants nor supporters could feasibly predict the outcome of the events. Stenhousemuir’s hero of the day Stewart Kean regrettably does not even feature in this pull-out, despite an exceedingly tidy trap-pivot-finish reminiscent of David Trezeguet at his best in the last moments of the match. 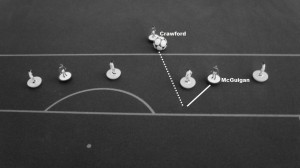 This site is a fan of the through ball, and there are few as clinically pure as the one David Crawford laid on for Rovers’ on-loan striker Mark McGuigan. Of course, any forward worth his salt in the SFL could theoretically be a danger when unopposed 25 yards from goal with a flat back four in front of him to penetrate, but nevertheless, the execution of the pass has to be near perfect so that a) the covering centre-back cannot recover the situation, and b) the goalkeeper is not in a position to sweep.

In fact, Stenny’s goalkeeper Callum Reidford was not shy in coming off his line throughout the match and did his best to challenge McGuigan after the forward collected the ball, but a kind ricochet allowed the striker to score the second equaliser of the afternoon. 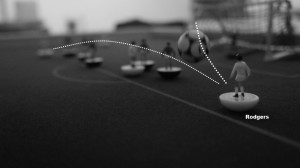 Seven minutes after McGuigan’s goal came the highlight of the match, if not the goal of the season.

Stewart Kean and Darren Smith combined well in the centre-circle from a long pass played out of defence. Kean was then able to carry the ball forward into Rovers’ half without challenge and the counter attack was well in progress. Darren Smith’s pace took him beyond the ball and his overlap on the left saw the returning Rovers defence stretched. As Smith approached the edge of the penalty box on the left side and dragged the opposition defenders towards him, Smith looked up and floated a cross to the opposite side of the box.

Andy Rodgers approached and thrashed the ball into the far corner of the net with the outside of the laces – all in a fluent scissor kick motion. The goal was almost on a par with Paolo Di Canio’s famous volley for West Ham. 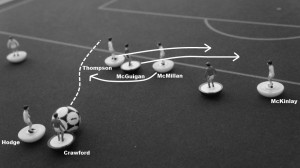 David Crawford had a fine match and Stenhousemuir will have been glad to not face him immediately again. Crawford enjoyed playing between the lines of Stenny’s midfield and defence – if his assist for McGuigan was not warning enough for Corrigan to know to prevent Rovers playing in that area, then the second last goal of the day was close to being a losing lesson for the rookie manager.

The move for the goal started just beyond the Stenhousemuir side of the centre-circle, with Crawford collecting a long ball. Warriors midfielder Bryan Hodge generally had a distinguished match as the away team’s playmaker, but he allowed Crawford to dribble beyond him too easily in this instance.

Further forward, McGuigan made an intelligent lateral run along the line of the Stenhousemuir defence. Corrigan’s agony was almost tangible on the pitch as Iain Thompson followed McGuigan’s run beyond and behind fellow centre-back Ross McMillan, leaving a ten-yard gap between McMillan and Greg Ross. Crawford noticed the gap and jinked towards the penalty box, taking McMillan with him.

However, McMillan’s starting position at left-centre-back allowed the defender no margin for error and he simply could not catch up with Crawford’s dart into the box. Crawford’s effortless finish – caressing the ball beyond Reidford then poking the ball into the net – was his second of the afternoon. If it wasn’t for Kean’s hat-trick, Crawford would have been the undisputed man of the match.

Despite the excellence of the goal in an attacking sense, it was a shambolic effort in defence. A flat back four with no protection from midfield will concede countless goals at any level. Stenhousemuir have been entertaining to watch in recent matches, but a boring and unfussy central midfielder might just bring the correct balance to the team.