Darren Smith looked especially dangerous on Saturday against Alloa. He utilised his pace to penetrate the Alloa offside trap to find himself one-on-one with goalkeeper Scott Bain. When he is able to play off and around clever forwards like Andy Rodgers and Stewart Kean, Smith will find himself with many more clear-cut opportunities like this over the course of the season.

Smith’s opener came from one-touch passing triangle among himself, Craig Anderson and Rodgers, culminating in the latter’s sumptuous clipped ball over the Wasps’ back four for Smith to chase on to. Rodgers’s assist was not entirely orthodox in as much as he chose a curved clipped ball rather than a more obvious “straight-up-and-down” chip, but the pass could not have been executed more perfectly.

The flight of the ball is guided beautifully in a curved arc around Jamie Doyle and Ben Gordon and into the space between and behind Gordon and fellow centre-back Jason Marr. The pass had enough top and side spin to kiss the artificial pitch and bounce away from the centre-backs for Smith to run onto and guide the ball on the half-volley beyond Bain. The goal might seem quite simple in concept, but witnessing the execution was a delectation.

THERE was little special about the goals in the first of this season’s North East derbies – both goals were penalties converted by Daniel Moore (although the first had to be re-taken because Moore stopped during his run-up). However, the move leading to the first penalty was particularly interesting, because it was a direct result of one of main tactical themes apparent during the match.

It was discussed on this site earlier in the week that there was a difference in the application of the two defences in the respective 3-5-2 formations. Elgin used a rigid, flat back three. This meant the Blue Toon’s Martin Bavidge could break through the line of defence and get to the bye-line to cut back for Rory McAllister (as he did on a number of occasions), but Elgin were well enough organised to always have one spare centre-back to help clear Bavidge’s centred balls.

By contrast, Peterhead had a more dishevelled shape to their defence. They were intent on having Ryan Strachan man-mark Dennis Wyness – the Elgin forward obliged by dropping deep and sometimes wide to drag the defence apart. That, combined with Craig Gunn’s channel running, left space for their attack-biased midfielder Stuart Leslie to run beyond the forwards. 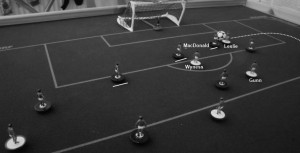 The first goal saw Leslie collect the ball from a long ball deep in Peterhead’s box. Leslie had dragged Peterhead’s Callum MacDonald over to him – not for the first time, but definitely the last in the match – and tempted the centre-back into a scythe which merited a penalty and red card.

Had Peterhead copied Elgin with a flat back three, such a desperate challenge might not have been needed, but then it would have had to have been off-set against Wyness finding pockets of space between Peterhead’s defence and midfield. In this instance, given the manner in which Peterhead’s discipline collapsed in the last 30 minutes, perhaps the flat back three would have been the lesser of the two evils.

Sometimes, no analysis is needed. Some goals are there to be enjoyed for what they are. 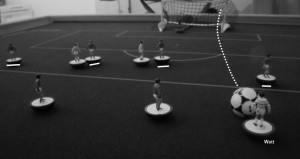 Ian Watt’s deliberate slice away from Jamie Barclay in goal from 25 yards was just delicious. The Clyde defenders did not take enough responsibility to close Watt down once Queen’s Park had worked the ball across the pitch to him. Jim Duffy will have been disappointed that his defence did not fully anticipate a shot on target from that distance, yet from 25 yards, they would have been contended in the hope Barclay could have coped with a strike from range which he would have had full sight of.

It is doubtful if any goalkeeper in the country could have saved that shot.