IT would be remiss of any kind of compilation of goals throughout the season that failed to include any from Chris Erskine. Pound for pound, Erskine must have been one of the SFL’s best performers during the camptain – it wouldn’t have been wholly unjust to simply rewrite the article as Erskine’s Bumper Goals!, because there are almost too many goals of his to choose from. The keepy-uppy and back-heeled one-two against Livingston was a particular highlight, as were the volley against Airdrie United and run through Falkirk’s defence to secure the First Division championship.

This writer’s particular favourite was another, similar, goal against Falkirk, at Firhill in the middle of January. With the score 3-1, including two goals from centre-back Conrad Balatoni (and a header from Erskine himself), the match was still quite evenly poised; Falkirk were often over-run in midfield, but until that point always looked threatening on the counter attack. 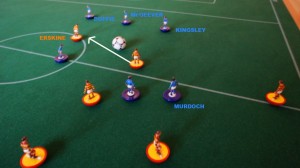 Erskine, running with the ball towards the opposition goal, is a frightening proposition

Erskine is no more dangerous than on the counter himself, and as Falkirk pushed high up the park, it was inevitable that Thistle’s star forward would find an opportunity to attack Falkirk’s goal again. Indeed he did, as a long ball from Thistle’s defence was miscontrolled by Bairns midfielder Stewart Murdoch, allowing Thistle at Falkirk’s back-line. Erskine was played through quickly, leaving him against a line of three defenders. 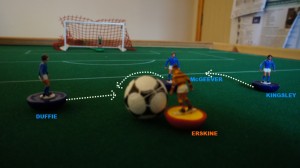 There are few – if any – Scottish players in the country as effective as Erskine in driving at an opposition defence with the ball. As he collected the football with his first touch, it seemed heavy at first but it over-committed Falkirk right-back Kieran Duffie, drawing the defender towards young centre-back Ryan McGeever and the ball at the same time. With a deft second touch, Erskine took the ball from the outside of his left foot to the outside of Duffie’s path, causing Duffie and McGeever to collide, knocking the latter off balance, shoulders-first into the turf. 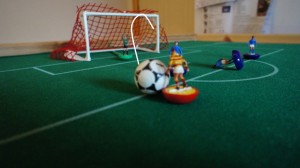 Erskine’s chip over McGovern was sublime

By then, Erskine only had Michael McGovern in goals to consider beating. Before Duffie had time to recover and potentially block any shot by Erskine on the edge of the 18 yard box, the forward had worked just enough of an angle to kiss a reverse chip over McGovern and into the left-hand panel of the goalkeeper’s net.

Among the directness of the running, the improvisation to beat two players at once and the impudence of the finish, this moment had all the ingredients for a goal of distinction at any level.

Another one of our favourite goals of the season, Queen’s Park showed that patience can be just as effective as an efficient counter attack. This goal shows the advantage of being able to do two things: firstly, being able to switch the play from flank to flank to stretch a defence; and secondly to have a full-back who not only provides width on the overlap, but also offers surprise penetration from the underlap. 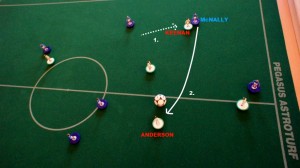 Keenan’s pressing on the defence brought the turnover in possession

The move started with some pressing by the goalscorer Mick Keenan on Montrose’s left-centre-back for the day Stephen McNally, who made an uncomfortable clearance which fell only to the Spiders’ central midfielder David Anderson. With Montrose’s left-back Paul Watson committed ten yards further upfield, there was a real opportunity to strike early with three versus three in the final third. Typically, Anderson went for the more considered approach, slow-cooking the play rather than risking a quick flash in the pan which could have resulted in yet another hasty turnover of possession. 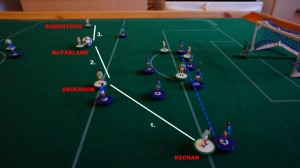 It seemed that Montrose had time to settle, but they were dragged out of position

Anderson dragged the ball forward from the halfway line for about ten yards before returning the ball to Keenan on the outside right channel. As Keenan then passed the ball inwards once again to Anderson, who passed inside to Tony McParland like a scrum-half to an inside centre, Montrose’s defence fell back into a flat line of four on the edge of the penalty area, protected by another narrow band of midfielders. When left-back Andy Robertson collected the ball from McParland 45 yards out on the left flank, Montrose were in a false sense of security.

Queen’s Park’s accomplished full-back pinged a low pass into Jamie Longworth’s feet, who had dropped short to collect and who tempted his marker Paul Lunan out with him. Longworth’s first-time pass landed at Sean Burns’s feet high on the left wing, perpindicular to the path of Robertson’s diagonal surge inwards. Although Robertson was covered by David Gray when he had the ball earlier in the move, Montrose’s right-midfielder absolved himself of tracking the full-back into the box, to some ramification. 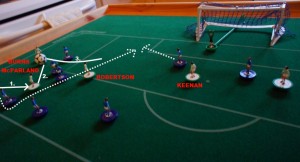 1) Robertson passed infield; 2) Burns held the ball up; and 3) Roberston drove to the bye-line to cut back for Keenan

By the time that Burns’s hold on the ball had tempted Montrose’s right-back out of the defence’s comfort zone, Robertson had two to three yards to himself to receive the ball and get to the bye-line, which consequentially dragged Montrose’s defender McNally towards him in an already precarious three versus two situation. The slow cooker had worked a treat, as Robertson’s cut-back left Keenan unmarked on the six-yard line to tap home. In terms of methodically picking away at the meat of the defence before eventually ripping it wide open, this was as succulent a goal as there was in the SFL this season.

Kieran Duffie’s goal contributed just a small part towards Greenock Morton’s irrelevant capitulation at the end of the season, but it was one of the more memorable aspects of it. The goal once again shows the difference in having quality in the full-back positions can make. Duffie has been one of the best full-backs in the First Division in the last couple of seasons; Falkirk’s attacking play depends a lot on the width he provides. If Lyle Taylor resembles a poorer man’s Thierry Henry, Duffie is reminiscent of a lower-budget Leighton Baines in terms of the attacking balance he provides his team. 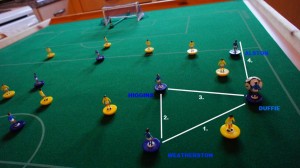 Falkirk began the move in tidy fashion, before Alston was played in and overhit his cross

This particular goal starts with Duffie at the point of a passing triangle just into Morton’s half. Despite Falkirk winning with only a slender margin at that point, they were in the ascendancy of an overall convincing performance against the visitors. Duffie slipped the ball down the line for Blair Alston to inadvertently overhit a cross, which did not go out of play and was collected on the far side by left-back Stephen Kingsley. In a completely unorthodox (but utterly successful) fashion, Duffie made a sideways run along the length of the 18-yard box to overload the left-hand side, where one full-back passed to another. 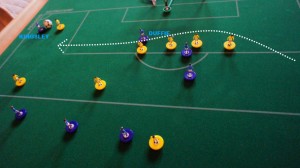 Duffie followed the cross all the way to the other flank, forming another triangle with Kingsley and Sibbald

The second passing triangle involved Duffie, Craig Sibbald and Taylor. Duffie passed the ball backwards to Sibbald before immediately bursting beyond his new marker Kyle Wilkie. Sibbald played a simple ten yard pass deep into the penalty box – with Morton sitting so deep (effectively defending the six-yard line) it allowed Taylor to hold off his own marker and casually lay the ball off for Duffie to hit through into the far corner. 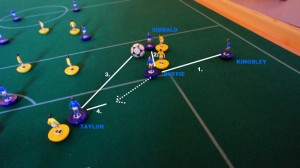 The link-up play among the various players was exceptionally good

The lack of inhibition shown by both Duffie and O’Donnell in their goals scored this season can potentially leave a gap in defence if not covered properly, but both right-backs have shown that the unconventional run to the opposite flank can prove devastating to the organisation of an defence.