There has been a plethora of spectacular goals scattered through the SFL this season. In a sense, we’ve been spoiled by the quantity and the quality of the strikes. Half an hour of your time on SFLTV‘s Goals of the Month features might not cleanse the soul, but the multitude of 30-yard screamers and gravity defying scissor kicks should at the very least offer a greater sense of being.

Having a Goal of the Season competition is highly subjective – to achieve any sense of objectivity, we would have had to poll all of our readers to find out approximately what was the year’s best goal among the three divisions. Our guess would probably be Bryan Prunty’s chest-to-overhead kick from 14 yards in Dumbarton’s meeting at Livingston.

As with the earlier pull-outs, this is a discussion of the more interesting goals over the season, either by team play, tactics or a moment of devine brilliance. You can let us know your own favourites below the line.

For the purpose of illustration, ball movement is shown as a solid line; player movement shown as a dotted line; and general team shape shown as a fragmented line.

Apologies are made for the lack of Subbuteo kit to accurately replicate every team’s kit, particularly for depicting Queen’s Park in green and white. We are always grateful for donations of old Subbuteo teams.

This goal was a triumph of Yogi Hughes’s stubbornly idealistic short-passing approach. At times, the attempt at a fluid passing game was a noose around the neck of the more than occasionally nervous defence, but when the ball could be played through to midfield and beyond, Livingston sometimes looked like a special team.

East Fife-bound Bobby Barr had put Livingston ahead for the first time in this League Cup first round tie after 96 minutes, before Jim Lister’s first half strike was equalised from a controversial Iain Russell penalty. The exceptionally young Livi team’s confidence grew late in the match, culminating in a memorable team goal. 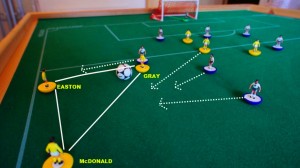 Livingston’s passing drew Dumbarton out of the centre, opening space for penetration.

Livi’s left-back for the evening was Connor McDonald and he gave a short throw-in to central midfielder Callum Fordyce on the half-way line, who immediately returned the ball. With a look around him, McDonald saw substitute forward Liam Gray come short for the ball and he took his marker deep into midfield with him, before forming a triangle with fellow sub Dylan Easton. The ball interchanged among the three, back to McDonald who then played a simple one-two with striker Marc McNulty. McNulty dropped just a little deeper again to receive and flick the ball back to Gray, who by then was occupying Easton’s left-wing position after the latter drifted infield. 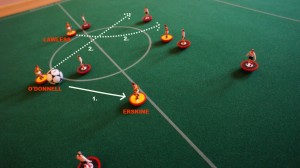 Yogi Hughes was a fan of passing triangles

This led to another triangle forming among the forward-rushing McNulty, the ominously quiet playmaker Scougall (who had pushed high into the striker’s position close to the 18-yard box) and Easton – and the three together found the space to interplay on the edge of the box. With Sons defender Alan Lithgow pushing to meet the play before being circumvented with a succession of wall passes, Livi effectively had three versus two in the most dangerous area in the pitch.

McNulty had time to take a touch from collecting Gray’s pass before laying the ball off to Easton, who immediately played another one-two with Scougall (for his first touch in the move) around the helpless Garry Fleming. Dumbarton’s right-back found himself chasing a lost cause and by the time he could approach Easton on the return pass, Easton scored from his shot at the edge of the box. 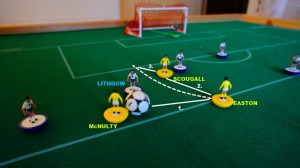 Scougall’s involvement was minimal, only playing the last pass, but he is typically at the heart of the moves

Thirteen passes; 20 seconds; one goal. This was progressive lower league football at its very best. Scoring a goal in this manner, in the 102nd minute, shows the kind of result that can be achieved when there is a dedication to playing one-touch passing. The strict idealism didn’t always work for Yogi in his short spell at Almondvale (indeed, Dumbarton made good work of pressing the Livi defence during the first 45 minutes), but when it worked it was wonderful to watch. Let’s hope we see some more like that from the Lions next season.

If ever there was a goal that typified the role of the full-back and attacking midfielder under Jackie McNamara’s Partick Thistle, this would be the one.

Thistle were still finding their way back to form after a stinging 1-3 loss at Cappielow a few weeks earlier. Despite thrashing Airdrie United at home 7-0 with six different scorers, a home fixture against Dunfermline Athletic – the de facto challengers at the time – seemed much more of a relevant test. Thistle went into a 1-0 lead before Aaron Muihead’s own goal levelled the match. Conrad Balatoni scored his first of six for the season to make it 2-1 shortly after half an hour, but the best goal of the eventual rout came from Stephen O’Donnell’s surge across the diagonal length of the pitch. 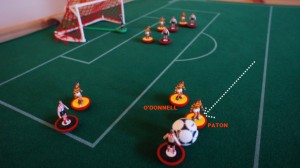 Paton’s aggression opened up the space for the counter

As Dunfermline attempted to play the ball around the edge of Thistle’s box, Paul Paton charged to win the ball rather clumsily, with the football falling rather kindly for O’Donnell, who skipped past the first challenge on the edge of his own box before driving forward and infield. At the edge of the centre-circle, O’Donnell slipped the ball to Chris Erskine before continuing his own run.

1) Erskine is brought into play; and 2) Lawless and O’Donnell make diverting runs

Erskine did what he simply does best by running towards the back-line with the ball at his feet. With Dunfermline’s midfield struggling to keep up with the speed of Thistle’s counter, the away side’s defence backed off while being distracted by decoy runs from Kris Doolan and Steven Lawless. 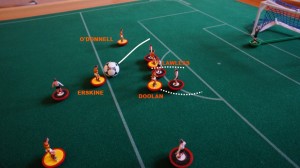 This allowed O’Donnell to arrive at the edge of the penalty box from the outside-left completely unchecked. With Erskine sliding the ball diagonally into his stride, O’Donnell’s first touch took the ball into the box and into a duel with Pars goalkeeper Paul Gallacher, who simply had too much ground to cover. Gallacher possibly went to ground too early as he rushed out, but O’Donnell’s cute chip skimmed over his body and into the goal.

The speed of the counter was breathtaking and to have a full-back who has the composure as well as the endurance to score a goal like that will bode well for Thistle in the SPL next season.

David Gray’s goal was simple, spectacular and also a parable on the perils of ball-watching. 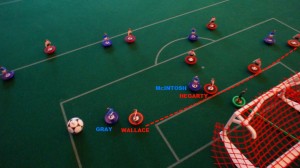 Rangers started off in an organised, comfortable position

The move started in essence with Montrose’s left-back Paul Watson swinging a high cross from the outside-left, which eluded everyone at the far post. Gray scampered towards the ball, taking Rangers’ left-back Lee Wallace with him. Wallace shepherded the Montrose midfielder to the right touch-line, where he was supported by Jonathan Crawford, who was in turn being watched by Dene Shiels. 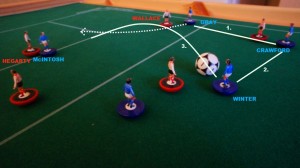 Crawford played a short pass infield towards central midfielder Jamie Winter, who looked up and saw Gray make a dart from the sideline towards the corner of the 18-yard box. Winter dinked a chip in the direction of Gray with his first touch, while Wallace naturally tracked Gray’s run. So far, so straightforward.

The variable in the equation which resulted in Rangers’ defence becoming undone was the movement of Montrose striker Leighton McIntosh towards the ball. McIntosh took Rangers’ left-sided centre-back Chris Hegarty towards him, leaving space for Gray to advance with his run inside.

By then, Wallace had been caught ball-watching. The Scotland international appeared to be too busy monitoring McIntosh’s movement to realise that Gray’s run – which at one point was destined to the near post – had diverted inside, parallel to the front of the penalty box. Gray therefore had the time to collect McIntosh’s cushioned first-time pass and do whatever he wished with the football – what he did was curl the ball into the top-far corner with the outside of his right foot.

Wallace’s positioning was not pretty. In most scenarios in the Third Division he probably would have got away with it, but his folly was exacerbated: firstly by McIntosh’s movement (and Hegarty’s shadowing) splitting Wallace and Gray wide apart, and secondly by the freakishly masterful finish. In one respect, it might by hypercritical to blame the left-back’s positioning for such an exquisite goal, but one must wonder if playing in the SFL benefits a Scotland international: if Wallace can switch off on the edge of his own penalty area in domestic competition, how will he cope when Croatia’s Darijo Srna cuts in from the flank?

In any event, this was a very good goal, containing imaginative one-touch passing, smart movement and an exquisite finish.