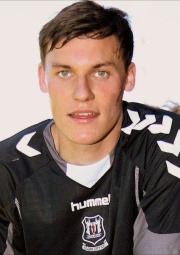 STUART LESLIE, Elgin City’s leading scorer this season, had a curious game during his side’s home defeat to East Stirlingshire. This was not a classic Leslie performance – although he scored a goal, he could not impose himself on the match as much as against other opposition so far in this campaign.

Leslie had not scored for four games, and after previously enjoying a sequence of scoring in six successive matches, this was possibly the best time to assess him. Scouting a striker when he is out of form can tell so much about the player because the forward’s body language can be much more telling when having to force a performance, rather than when everything falls into place.

The first notable theme of Leslie’s general play against East Stirlingshire was that he was unable to physically dominate the defence. Playing alongside the shorter and more technical Dennis Wyness, Leslie was effectively the target for the majority of goalkeeper Joe Malin’s kick-outs. The Shire had Jordan Holt and Raymond Buchanan in the centre of defence – while Leslie matched Holt for physique (both players are around six-feet tall), Buchanan was a couple of inches and at least a stone heavier. Leslie’s early duals were with Holt, but the City forward could not win any of his headers, nor could he avoid the smaller centre-back’s interceptions on the ground. It took ten minutes to pass before his first meaningful touch in the game, nodding the ball down awkwardly after mistiming a jump but nonetheless getting it to captain David Niven (then playing in central midfield), who eventually switched play to the left flank.

By then, the Shire had already scored once and were about to score another, both through Michael Hunter and both set up by opposite number 9 (and this writer’s man of the match) Kevin Turner. Although the fault for the goals could never directly be attributed to Leslie (who was at least half of the pitch away the action), they were symptomatic of the pressure which Elgin’s defence had to ensure. If Leslie, in leading the forward line, didn’t have a reasonable duty of care to protect Malin’s goal in open play, neither was his influence goals as tenuous as in chaos theory. As Wyness and Leslie together could not keep the football from the opposition defenders, Elgin’s own defence could not push further up the pitch, thus inviting Turner to receive the ball close to Elgin’s penalty area. It did not take long for the home side to fold.

Leslie and Wyness seem suited to each other and have a good understanding: when one (normally Wyness) drops deep to link with midfield, the other (typically Leslie) occupies himself directly against the defenders. It is the the execution of this concept, though, where Leslie still has some learning to do. For instance, after 20 minutes in the match, Wyness had the ball to run at the defence from the space behind the back of the East Stirlingshire midfield. As he drove forward, he would have expected Leslie to have made a lateral run across one, if not both centre-backs to distract and drag them out of position. Leslie’s run, however, remained fairly central, and Wyness missed his shot from an impossible view with three other players (including Leslie) around him.

Another time, close to the interval, it was Leslie’s turn to drop deep to link with Mark Nicolson, who had made a graceful dribble with the ball in the middle of the pitch. While Wyness ran from outside-in higher up the pitch, Leslie stuck to the central three-quarter area of the pitch to give a wall pass for Nicolson – although his showing for the pass was textbook play in another circumstance, the Shire had actually no-one centrally to impede Nicolson’s run, making Leslie’s involvement unnecessary. His continuous side-on body language, as an unspoken command for the ball, distracted Nicolson – Leslie’s wall pass was probably intended to give Nicolson time off the ball to line up a shot on his first touch, but Nicolson eventually overhit a pass to the right wing in any case. Leslie would probably have been better served making a mirror run to Wyness to further create space for the oncoming Nicolson.

On the cusp of half-time, Leslie reacted first to a Wyness header that ricocheted off the bar, but with a goalkeeper and defenders looking to block any incoming shot on the line, he showed composure to keep his head over the ball as he struck the ball firmly into the goal from 12 yards. It was an important contribution which brought Elgin to within one goal of Shire at half-time, and was well-taken for Leslie’s only good chance in front of goal in the match.

The second half carried on in a similar fashion for the player where his off-the-ball running could have been better. That said, despite an obvious growing frustration, Leslie always showed for the ball from the midfield, defended from the front by chasing defenders in possession, was never shy in demanding long balls from Malin and always looked to compete against the opposition centre-backs. His timing in his jumping improved considerably and he was later winning the ball in the air against Buchanan as well as Holt. When given good enough service, Leslie showed he can run the channel with the ball excellently, giving his team time to squeeze the play into the opposition half as they pressed to get back into the match. The service that he received during open play was never consistently good enough, however, with Ross O’Donoghue uncharacteristically making a number of wayward passes and Nicolson’s own range short of his own standard before being substituted.

As the prospect of gaining any points from the match escaped Elgin, so grew Leslie’s dissatisfation in the collective and individual performance. An injury-time challenge on Holt after the defender cleared the ball seemed to have missed the attention of the officials (a yellow card has been reported, but this writer did not see the referee issue the warning). Nevertheless, only a minute later Leslie clattered into Holt again, showing the studs of his leading leg, resulting in George Salmond brandishing a straight red card without a need to pause for consideration. Leslie’s work ethic and potency in front of goal will be missed during his suspected two-match suspension.

It is reassuring to see that while this was not Leslie’s finest game so far this season, he still managed to score with his one clear-cut opportunity and he used every effort (if not always perfect execution) for the Elgin cause. Although there is still much to improve in his all-round performance, Leslie remains a very important forward to a team with aspirations of promotion to the Second Division. If the player can add some positional awareness to his game as he matures, there is no doubt that the upper tiers of Scottish football beckon.