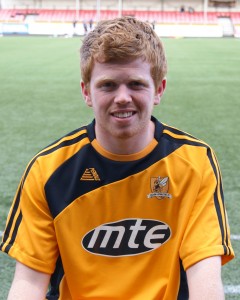 ALLOA ATHLETIC’S rousing 5-1 victory over a miserable Albion Rovers saw the club ascend to second place in Division Two. A hat-trick from Martin Grehan, a fine strike from Mitch Megginson and an incredible own goal from Simon Marriott gave the Wasps a deserved win.

So far this season, Alloa’s form has been rather inconsistent but in recent matches, the club have begun to flex an impressive attacking muscle. The fluid interplay of Grehan, Kevin Cawley and Robert Thomson (a Dundee United loanee) has been vital to the side’s remarkable run of results and the key component in Paul Hartley’s 4-3-3 system is the high level of creativity in advanced positions.

At times, Alloa’s shape has a protean quality and the side can easily shift into a 4-2-3-1 or even a 4-1-4-1 formation with Graeme Holmes and Stephen Simmons often pushed upfield behind the main striker. More often than not, the forward runs are split on a rotational basis between the duo and fellow midfielder Ryan McCord.

McCord, a former Dundee United player, was one of Hartley’s first signings last summer. After failing to make a significant impact at Tannadice, the 23-year-old enjoyed a generally prosperous spell at Airdrie United before moving to Alloa. Ryan was joined by his brother Ross, and both have proved to be crucial signings.

Ryan McCord is perhaps more of an orthodox midfielder, taking up the “number 8” role alongside Holmes, the more offensive player of the two. However, McCord possesses real attacking quality and could arguably operate more effectively in an advanced position – last season, the player scored 11 goals from 32 league games. His energy and tenacity allows him to cover vast areas of the pitch and complements the balance of the side.

While players like the mercurial Stevie May received the greatest adulation last term, McCord was central to Alloa’s championship victory. He was confident in dictating the tempo when his side pushed forward and equally adept at maintaining possession. This season, his passing has improved – this particular attribute is well above Division Two standard – and his ability to switch the play quickly has become an important part of Hartley’s strategy. With full-backs James Doyle and Daryl Meggatt using their high energy to push forward in their frequent counter attacks, McCord’s passing is crucial in swiftly moving balls out to the flanks.

The match against Albion Rovers was not his finest match for Alloa, but he was still influential in shifting the ball from defence to attack and introducing the talented Megginson and Nicky Low into the game as often as possible.

It is difficult to find a technical weakness in the player, particularly given his comfort in possession and his ability with both feet. A minor gripe is his hesitancy to move beyond the main forward when the opportunity presents itself, although this can be difficult for a “number 8” unless there is a precise midfield balance in the side.

The rise of Alloa Athletic in the last 18 months – driven forward by ambitious chairman Mike Mulraney – is a fascinating project to follow. The large majority of last season’s Third Division side has comfortably adjusted to Division Two and the squad are certainly capable of achieving back-to-back promotions. McCord has experience of playing beyond the third tier and would be able to make a return to a higher level.

If rumours are to be believed, there are a number of First Division clubs throwing admiring glances in the direction of the midfielder. A promotion could have a major say in where McCord plays next season.