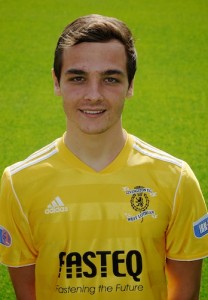 BERWICK RANGERS clambered into fifth place in Division Three after beating East Stirlingshire by one goal to nil. Ross Gray’s decisive strike on 22 minutes secured the Wee Gers’ first away win of the season and allowed them to keep pace with Queen’s Park and Montrose immediately above them.

Berwick had been reduced to ten men on the hour mark after Steven Notman collected two bookings in the space of three minutes, but despite a rousing performance from the Shire – Paul Quinn’s late effort clipped the inside of the post before bouncing back into Ian McCaldon’s grateful arms – they were able unable to make the most of their numerical advantage.

Alongside McCaldon, Gray was the game’s outstanding performer. The 20-year-old midfielder graduated from Livingston’s youth academy and made his first appearance for the West Lothian club on 7 May 2011 in a 3-1 victory over Alloa Athletic. First team opportunities have since been limited and midway through last season, the player joined Berwick as an emergency loan signing, making 20 appearances. Despite agreeing a one-year extension with Livingston in the summer, Gray returned to Shielfield Park in October on a three-month loan. So far, Gray has proved to be one of the club’s most important players, scoring three goals in as many league matches – his goal on Sunday was anything but pretty, with Lee Currie’s cross connecting with Gray’s knee and spinning into the net, but it has been his most important contribution this season.

Manager Ian Little reserved particular praise for Gray’s performance in his post-match interview, lauding the player’s work ethic and describing him as “influential” to his side’s style of play. The right-sided midfielder offers a solid balance in Berwick’s orthodox 4-4-2 system, with Kevin McDonald providing a direct outlet on the opposite flank. His excellent work-rate and stamina is vital in allowing his side to press the opposition in the centre of the pitch and when his side are behind the ball, he often tucks infield to create a compact unit in the middle of the pitch.

Gray’s high levels of endurance allow him to motor up and down the right flank and he has formed an industrious partnership with full-back Devon Jacobs – as Jacobs overlapped into offensive positions, Gray would always diligently covered for him. His willingness to adhere to his defensive duties was crucial as midway through the second half, the Shire launched into a counter-attack – Paul Quinn eventually shot across the face of goal, but Gray was in place to hack the ball to safety before Kevin Turner could slot home an equaliser.

Can Ross Gray return to Livingston and make a positive impact in the First Division? Perhaps. His current form at Berwick suggests he is more than comfortable in Division Three and could make the step-up to Division Two in the near future. However, it is crucial to the youngster’s development that he continues to play on a regular basis. Gray will return to Livingston in January and could make a decent acquisition for a Second Division side if his opportunities at his parent club are limited.