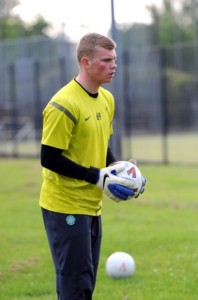 Club: Stenhousemuir (on loan from Celtic)

AT the second attempt, Stenhousemuir progressed to the fourth round of the Scottish Cup after defeating Berwick Rangers at Shielfield Park. The 5-2 score-line might suggest the match was a one-sided affair but for the best part, it was a fairly equal contest. To run out a well-worn cliché, it was a game of two halves in which both goalkeepers played a crucial role in determining the final outcome.

In the first half, Berwick Rangers cut through a pancake-flat Stenhousemuir on numerous occasions only to be thwarted by Robbie Thomson in the visitor’s goal, and his solid handling prevented a minor upset. Meanwhile, six minutes from half-time and with the Wee Gers leading, the match turned against them when goalkeeper Youssef Bejaoui failed to claim a fairly innocuous cross, allowing Darren Smith to equalise by deftly flicking the ball into an unguarded net. Bejaoui’s lack of assurance cost his team badly and the Warriors scored three goals in eight second half minutes to effectively end the contest. While Bejaoui struggled, Thomson starred.

The son of Scott Y Thomson – himself a goalkeeper and part of the celebrated Raith Rovers side which beat Celtic in the 1994 League Cup final (during the penalty shoot-out, his save from Paul McStay proved decisive) – Robbie Thomson initially joined Stenhousemuir from Celtic on a one-month loan agreement on 25 September (which has since been extended) after injuries to Callum Reidford and Dean Shaw. The player is highly regarded at Parkhead, with coaches believing him to be one of the finest young goalkeepers to have emerged from the club’s academy in years. Thomson’s rapid development even saw him playing for the U-19 side at the age of 16.

The 19-year-old made his debut for Stenhousemuir in the League Cup match against Inverness Caledonian Thistle and although the side ultimately lost the tie on penalties, Thomson was hugely impressive. Other than the 2-7 aberration against Brechin City where he was directly culpable for several of the goals, Thomson’s performances have been generally excellent and in this author’s eyes, he is already one of the very best goalkeepers to have ever played for the Warriors.

It was fascinating studying Thomson against Berwick last week. His shot stopping might have been his most obvious and eye-catching quality, but a universal truth is that all goalkeepers are good shot stoppers. From the Champions League to Churches League Division Three, the principle tenet of being a goalkeeper is to prevent the ball from going into the net. Of course, what truly separates the likes of Iker Casillas from Allan Creer is just how they stop the opposition from scoring.

There was little he could have done to prevent either of Berwick’s goals – the first came from a penalty, the other was a well-struck shot from a one-on-one situation – but his level of performance, particularly throughout the first half, was outstanding. With midfielders Craig Anderson and Bryan Hodge failing to offer their defence adequate protection, Berwick were able to attack the Stenhousemuir back-line with relative ease and fired off shots from the edge of the penalty area. Thomson repelled their efforts by either pushing them well away from goal and out of the reach of any onrushing forwards, or by getting his body behind them and holding them. The shots were all struck with varying degrees of ferocity, but they were all expertly dealt with.

As well as shot stopping, distribution, aerial ability, command and organisation are also crucial attributes for goalkeepers and it is his kicking which is perhaps Thomson’s strongest quality. In testing conditions, he is able to reach considerable distances and his sound distribution is central to how Stenhousemuir function. Against Berwick, manager Martyn Corrigan had configured his side into a 4-2-3-1 system with John Gemmell acting as the focal point in attack. During goal kicks, Gemmell would move over to the left touchline with the intention of flicking the ball into pockets of space for his teammates. The tactic only worked sporadically, not because of Thomson’s kicking (his accuracy was unfailing), but because Gemmell was well marshalled by centre-back Dougie Brydon who moved to the flank with him.

Thomson’s ability to organise his defence also played an important part in his side’s victory. Although only 19, he is vocal and continually barked instructions to his makeshift backline, ordering them to keep their formation. With Brown Ferguson, Iain Thomson, Ross McMillan (all 30) and Greg Ross (25) playing in front him, the goalkeeper’s boldness in directing his seniors showed maturity.

The only relative weakness in Thomson’s game is his ability to save penalty kicks (somewhat ironic given his father’s success). He dived over the top of Lee Currie’s penalty, while in the aforementioned match against ICT, he rarely came close to blocking one of the opposition’s efforts. However, any worries about his height should be allayed – at around 6ft, Thomson may not be the most physically imposing of goalkeepers, but his standing leap, his muscular build and his willingness to come for aerial balls (he rarely punches unless under extreme duress) means that conceding from set pieces are a rare concern.

It is difficult to predict whether or not Robbie Thomson can become a part of the Celtic first team. In Fraser Forster, the club have the best goalkeeper in the country on their books and barring a major dip in form or a serious injury, it is highly unlikely he will be deposed in the near future. That said, Thomson is certainly far too good a player for a team like Stenhousemuir, and indeed the SFL itself. The young goalkeeper has a bright future ahead of him and will likely become a regular in the SPL or the English Championship. As for the immediate term, Corrigan will be hoping to keep him at Ochilview for the time being.