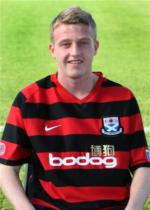 AYR UNITED kept alive their slim promotion play-off aspirations with a 2-1 victory over a struggling East Fife at Somerset Park last Saturday. Despite trailing to a first-half Scott Durie goal, the Honest Men secured victory through late strikes from Liam Buchanan and David Winters and the result has allayed any fears they had of relegation. The Fifers, meanwhile – now 11 games without a win after Tuesday night’s dreadful 0-6 capitulation at Brechin City – look increasingly troubled in ninth place.

East Fife manager Billy Brown configured his side into an ultra-defensive 5-3-2 formation with Bobby Barr and Paul Willis – players who nominally operate as pure wingers – making up the midfield three alongside Scott McBride. Mark Roberts lined his team up in an orthodox 4-4-2 formation with Mark Shankland and Michael Donald on the flanks and with the experienced Scott McLaughlin partnered in the middle of the park by Robbie Crawford.

Indeed, the contrast in formations allowed Crawford to enjoy a prominent role throughout the match. East Fife’s front five ceded possession on a regular basis and with their panicky play forcing them to sit increasingly deep, it afforded Crawford the time and space to showcase his strengths. However, the encounter also highlighted a number of areas for improvement in the player’s game.

After a series of impressive performances for the club’s academy sides, the 18-year-old signed his professional contract with Ayr in November 2010. Bright things were forecast for Crawford at the beginning of the season, and the player made his debut in Ayr’s opening fixture, a Ramsdens Cup tie at East Stirlingshire. He made his first start against Forfar Athletic at the end of August. Crawford usurped Ryan McStay from the starting XI and would go onto enjoy a 16-game run in which he would play every minute.

His display against the Loons was one which attracted a number of scouts from English Premier League and Championship clubs. While Crawford (not to be confused with the 20-year-old Rangers midfielder with the same name) was deployed on the right of midfield on a number of occasions earlier in the season, he is most comfortable in the middle of the park, with Roberts comparing his style of play to that of Barry Ferguson.

Crawford is rumoured to be a quiet presence within the Ayr United dressing room (something which is apparent on the park) but he is a youngster who responds well to instructions and advice from his coaches and the older players around him. Composed in possession, the Kilwinning youngster combines poise and control which allows him to quickly turn away from opponents whilst retaining the ball. It is this same technique that also gives him the ability to glide beyond players, despite lacking any obvious strength or pace. His willingness to make himself available to collect the ball and move it into advanced positions is a trait that belies his young age.

One area where the player is somewhat lacking is his offensive nous. While East Fife were content to sit deep and allow Ayr United space, Crawford lacked the guile to pick apart their defence and mistrusted his ability to shoot from range. In 27 appearances, the player has yet to score despite being presented with a good number of chances. Crawford’s best role is perhaps as a deep-lying midfielder charged with winning (he is an accomplished tackler) and then keeping the ball with the aim of serving the more creative players in front of him.

This season Crawford has been the star performer in an underachieving Ayr United team. He undoubtedly has a bright future ahead of him and with his contract set to expire in May, the player is at a crossroads. Crawford’s career has the potential to follow the same trajectory as former Honest Men Craig Conroy, Ryan Stevenson and Stuart Bannigan (who made 24 appearances during a loan spell from Partick Thistle in 2010-11), from the SFL to international recognition. Like Conway in particular, he would certainly benefit from full-time training with a club at a higher level, something that Ayr cannot offer presently.

Along with fellow youngster Mark Shankland, Crawford will spend next week on trial with Birmingham City. It is the second occasion he has trained alongside Lee Clark’s squad and the player has already praised the facilities at the Championship club. Which is best for his development? With Ayr United in the Second Division with the virtual guarantee of regular first team football? Or taking an uncertain step into full-time football at Birmingham or elsewhere?

It is an age-old dilemma for any young, talented Scottish footballer. However, Robbie Crawford appears to have the ability and the temperament to grasp any opportunities that will inevitably come his way.

An exiled Honest Man since birth, distance from Somerset Park has not diminished Alistair's support of Ayr United. A placemaker by profession, he contributes match previews to the club's online content and once saw Andy Walker in a furniture store in Tillicoultry.