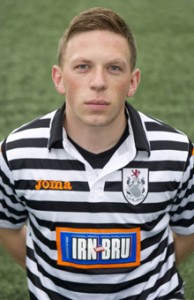 QUEEN’S PARK surrendered their place at the top of the Third Division to Rangers after losing 2-0 to the Ibrox club on Saturday. Two strikes from Lee McCulloch allowed the home side to leapfrog their Glasgow counterparts, but the Spiders should take heart from a resilient performance.

Given Rangers’ lack of pace and skill in wide areas, Queen’s Park manager Gardner Speirs’s decision to create a narrow, compact midfield was entirely appropriate; by utilising defensive midfielders David Anderson, Michael Keenan and Guiseppe Capuano, QP were able to limit Dean Shiels and Fraser Aird from working with McCulloch’s assorted flicks and knock-downs. While the middle of the park was a crucial area in the game – Anderson, covered in last week’s Scout Report, was typically economic in possession and one of the game’s outstanding performers – the domineering display of 23-year-old Ricky Little was equally as important.

With captain Tony Quinn relegated to the bench, Little skippered his side on Saturday, a symbol of his increasing responsibility at Queen’s Park. The long-serving Quinn is a popular figure amongst his team-mates, but Little eased into the role of coercing and organising those around him from his withdrawn position in defence.

At the very least, any centre-back at any level must have a solid positional understanding, an ability to win aerial duals, and be adept at winning challenges on the floor. Little is highly capable at all three. From a standing position, there are few players in the Third Division with as impressive a leap – against Lee McCulloch, one of the league’s most physical players (and more than three inches taller than him), Little competed well. Naturally, he lost a handful of challenges against the Rangers captain, but for the best part, he kept his back line steady and did not allow their hosts to work off the scraps from any successful knock-downs.

On the ground, Little is a fine tackler and is highly disciplined at knowing when to commit to diving in and when to abstain. There were a number of instances against Lee Wallace in the second half when the full-back drove in the penalty area, and Little made the correct option to stand up and force him out of play rather than going to ground. His sense of timing was also evident when he moved forward to sweep any balls away from Shiels, Aird or Ian Black as they attempted to make penetrative runs beyond McCulloch.

The player is also remarkably spritely and can burst forward quickly over short distances. In the final ten minutes, Rangers introduced the vibrant Barry McKay to take advantage of the space vacated by Queen’s Park’s midfield as they pressed for an equaliser – Little was alert to curb McKay’s breakaway, sprinting after his opponent then forcefully challenging to regain possession. In fact, his adroitness in turning to face his own goal is invaluable to the shape of the defence, allowing Jamie Brough to sit a few yards further forward.

With the ball at his feet, Little is capable of making sweeping, quick passes forward, giving the side a second option to playing through Anderson in midfield. When Jamie Longworth dropped  into the inside-right position, Little was able to move the ball into the striker’s feet, which in turn brought QP’s full-backs and wide forwards into the game. Little spent part of last term at full-back, a position which allowed him to showcase his ball-playing and carrying ability – he has also brought these qualities to centre-back.

While the spotlight is on Queen’s Park’s outstanding young players Lawrence Shankland and Andy Robertson (and rightly so given their impact on the first team so far this season), Ricky Little is progressing strongly as a footballer and is showing increasing maturity in the middle of QP’s defence. Although Little has spent time with Ayr United and Partick Thistle at higher levels, he was never able to enjoy sustained periods in their first team – a strong season with Queen’s Park could see the player return to a higher level. At 23, there is still time for Little to make an ambitious move to the First Division, and then perhaps the SPL.