This goal is not about how special the build-up to the goal was, or even the execution of the finish. This is about how easy it is to make goal-conceding mistakes in defence.

Livingston’s Kevin McCann had a match to forget, and the right-back was culpable for the concession of the first goal at the beginning of the second half. A long and deep freekick from Airdrie’s right flank was directed towards the far post, but McCann stood off the forward he was meant to be marking by a couple of yards – inexcusable defending around one’s own six-yard box. The resulting shot was parried by goal-keeper Andy McNeil, but straight to John Boyle, who scored his fourth goal in two league matches. 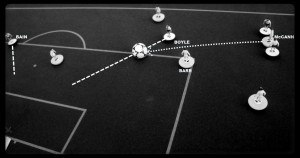 Things were to get worse for McCann. On 70 minutes, he was being heavily pressed in the right-back position before attempting a regulation five-yard pass to his centre-back Craig Barr. The pass was inaccurate and  Barr could only prod a toe at the ball, which did not prevent the football rolling towards the path of the on-rushing John Boyle. Boyle took the ball towards the goalkeeper but the shot was straight at McNeil, who once again could only parry to his left where winger Bain was free to score.

For all of Livinston’s ability to pass the ball and create pressure, they will continue to struggle if they can be pressured into basic mistakes at the back.

Once again, there was nothing spectacular about the goal scored itself, but the shape of Dunfermline’s back four in the build up to the goal is worth noting.

The goal started with Thistle’s attacking midfielder Chris Erskine collecting the ball 30 yards out from Stuart Bannigan on the left flank. Erskine turned to drive towards goal, where he saw Steven Lawless unmarked on the edge of the box. A through pass was played to Lawless, with the Jags’ forward having beaten Dunfermline’s offside trap. In fact, the trap was barely set up: the Pars’ left-back Stephen Jordan was a couple of yards deeper into the box than everyone else. Jordan attempted to make up for his error by racing on to Lawless, but Lawless sold him a dummy and retained enough balance to poke the ball home from 14 yards.

The picture above shows Erskine on the ball before Lawless is released (Dunfermline’s defenders are highlighted). Typically, a back four would be lined up across the box with pressure put on the play-maker to stop the through ball, but Dunfermline’s lack of positional organisation for the goal is alarming.

What else was noteworthy in the match was a particular spell of possession earlier on, where Thistle patiently kept the ball. It might be easy for any top-level team to pass the ball among the defenders with ease, but the extended patience shown by the Thistle team was admirable and quite rare for a contemporary team in the SFL. After Sean Welsh won the ball in midfield, he passed it back to Stephen O’Donnell at right-back, who switched play to Stuart Bannigan at left-back and possession was recycled from there.

At the heart of the two-minute move – unsurprisingly – was Hugh Murray, who conducted a string of first-time passes among the defence that were unopposed by Dunfermline’s forwards (simply because Barrowman was out-numbered and could be passed around). Thistle continued to hold the ball, bringing possession forward in the hope to find a gap but when that failed, the football was gradually brought back to defence to start again. The ball was only lost with a risk taken in the final third with a through ball for Lawless to chase on to.

What was promising about Thistle on Saturday was the ability to change the style of play to suit. A passing move as described above can help set the tone for the match, but a more direct approach is sometimes necessary to surprise a defence – this was also used during the game. Thistle’s best asset from last season – running with the ball on the counter-attack – was also seen against Dunfermline. The Jags could very well be the team to beat this year.

This is not even a goal, but it would have been a goal to grace the SPL if the finish had been accurate enough.

Queen’s Park left-back Andrew Robertson drove forward on the left flank, before cutting inwards to pass towards Lawrence Shankland. Shankland was under pressure from Montrose’s in-form wide forward Lloyd Young who was dragged deeper in this particular move, but Shankland still had the composure to take a touch before splitting the Montrose defence in two with a delicately nudged pass. 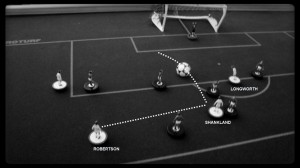 The Spiders’ forward Jamie Longworth read the pass and raced on to it, but the ball was angled towards the left of the six yard box, making the angle to shoot beyond David Crawford increasingly acute. Longworth took the shot on first-time with his left foot, but the ball kissed the base of the far post and away to safety. Shankland’s assist and Longworth’s finish from the tighter angle would have been a deserved equaliser, but Queen’s Park had to endure further toil to earn a draw in the match.