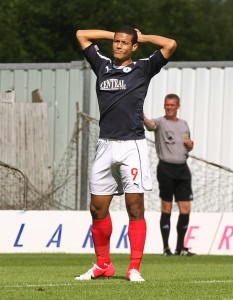 FALKIRK’S six-game winning run came to an abrupt end on Saturday as they were defeated 3-4 by Dumbarton at the Falkirk Stadium. While the Bairns ultimately failed to take anything from the match, manager Steven Pressley was buoyant about his side’s performance, particularly his young charges’ habit of scoring late goals. It was a sour end to a very interesting calendar year for Falkirk which included League Cup victories over Rangers, Dundee United and a semi-final berth against Celtic. Pressley’s side also tested themselves against the Gers twice this campaign in the Ramsdens Cup and the League Cup.

There were plenty of positives for Falkirk to take from their recent defeat, and in particular, the continuing goal-scoring prowess of English centre-forward Lyle Taylor, who took his league tally to 13 for the season and 16 in all competitions. The 22-year-old had set a target of 15 goals before the turn of the New Year and going one better will be immensely satisfying to the striker.

Taylor moved from AFC Bournemouth to Falkirk in the summer in search of regular first-team football, having spent long periods of his spell with the Cherries on-loan at non-league clubs. Given the departure of Moroccan striker Farid El Alagui – who had scored 18 goals in the First Division last season – the opportunity to bring in a direct replacement of similar calibre was gratefully accepted. It is worth noting that Falkirk are not yet halfway through their league fixtures, but Taylor is just three goals away from equalling the now-Brentford striker’s total of last year.

Taylor’s finished 2012 in outstanding form. He scored a hat-trick against Airdrie United last Saturday and then matched the feat against Dumbarton. His hat-trick against the Sons was completed in an impressive fashion, with the player scoring a variety of different goals. Taylor possesses a number of strong attributes, but it is his predatory instinct inside the penalty box which is integral to his  fine scoring record.

His first strike on Saturday came from a neat one-two between Stephen Kingsley and Blair Alston on the flanks, before the former crossed perfectly to Taylor and he crashed his header beyond Jamie Ewings with conviction. By the time Taylor scored his second, Falkirk were losing 1-4 but the hosts were on the ascendency. This time, he controlled a neat through-pass from Alston and slid the ball past the goalkeeper. With two minutes to go, Taylor rose highest amongst a ruck of golden shirts to complete his hat-trick.

Leading the line as a lone forward is a demanding task, but Taylor has the make-up of a complete striker. Physically, the Englishman’s pressing ability and work-rate is ideal in forcing mistakes in opposition defences – on 13 minutes, he charged after a loose ball and dispossed Alan Lithgow but Sean Higgins failed to convert the chance. Taylor also has a strong running power over longer distances and over ten-to-15 yards, he is a dangerous opponent when he is afforded space.

The dynamic player is involved in most of Falkirk’s good work in advanced areas. Taylor has a decent first-touch and can play with his back to goal, holding up the ball to bring others into play, with Higgins and Alston in particular thriving on his link-up play. The forward is also flexible enough to drop into deeper areas as well as lurking in and around the penalty area.

Although there are very few weaknesses in Taylor’s general play, he has admitted himself that he could have actually scored more this season. The striker went through a barren spell of five games in the league without a goal, which he found disappointing given his work-ethic and determination.

Like El Alagui and Kalum Higginbotham, Falkirk’s two brightest players last term, Taylor is almost certain to secure a return to a decent level in the English Football League. Scouts from across the border regularly appear the Falkirk Stadium and it is highly likely the striker will have attracted the attention of a League One or League Two with his recent performances.