I LOVE all SFL football. I support Partick Thistle, but there isn’t a ground or a team I wouldn’t go to or watch. From Elgin to Berwick – it all resonates with me. I’m not in the business of playing favourites with the teams in the SFL, but for my first competitive match of the season it had to be a game with some spice in it. Yes – the Ramsdens Cup first round tie between Clyde and Thistle.

I hadn’t seen Clyde play this year. While I was familiar with most of the players they retained from last season and some of their new signings, I had no idea how they would line up. I intended to approach the game as a scouting mission to help me rate the teams and their squads and build a better understanding for upcoming games – I live and die by my ability to rate a player. In the event I’m incorrect and I misjudge a player’s ability, then I suffer through losing bets. This is the epitome of putting your money where your mouth is. I’d describe myself as fairly selective with my betting, but ultimately the decision of whether or not I bet comes down to if the ratings dictate it’s good value.

It’s worth discussing the meaning of value and how we can identify value around us. The principle of making money for me in the betting markets is based around that simple premise.

“Is this where you are going to mention sticking a bet on? Please!”

For illustration, these are the odds given by McBookie the day before the game:

The % figure in brackets is the expectancy the bookmaker has put on each of these events happening. In a future article, I’ll explain a little more about how to create your own prices each week, but for now we’ll focus on how I make my betting decisions.

It’s quite simple: if I think there’s a greater chance of the event happening than the bookmakers suggest, then I will have a bet at its value. In this instance, if I felt Clyde stood a 20% chance of winning the game, then I’d make a bet. The size of the bet would be in proportion to the advantage I felt I had (otherwise known as using a staking plan, a concept to be covered next week).

“But are there other factors I should consider?”

How many factors are worth considering outwith the actual ability of the players? These are debatable, but the ones I always give consideration to are:

I mentioned in last week’s article that I’m using a sophisticated piece of software to assist me with my betting. The product, used by sportsrated.com this season, has been in development for around 18 months and I’ve been lucky enough to gain access to the beta test environment.  It includes the ability to toggle different factors surrounding the match. The algorithm has been worked out on the basis of testing thousands of games, and the effect that certain conditions will have on them. I’ve talked extensively to the mathematicians involved and have every faith in their ability. The interface is set up in a straightforward way so that all I need to do is punch in my data and the software does the rest.  The software generates 10,000 “virtual matches” based on the playing conditions and ratings, then gives an output of win/loss/draw expectancy. Here’s a screenshot: 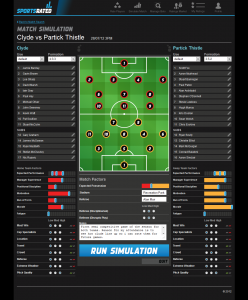 The formations chosen and the players included were based on my thoughts on previous systems and the personnel who may have been involved in the game. I knew I wasn’t going to bet on this particular match, so it was set up purely for illustration than for investment. The Thistle team was actually fairly accurate – I had my doubts over a couple of players’ involvement but again, it was only used as a guide.

(Something that does excite me is the people at sportsrated.com telling me that once they’re live, there will be the facility to share or sell your ratings of teams with other users. This would mean I could find the most successful Clyde gambler among the user base and purchase their opinion for the purposes of betting.)

I could make a guess about Clyde’s performance and make a bet, but it would be ill-disciplined of me – how can you expect to make money from a transaction if you don’t know the correct buying or selling price? You wouldn’t buy a car for £5000 more than it was worth, or sell one for £5000 less. The same principle applies to betting. The decision on this game was not to bet.

As far as the match itself was concerned, Thistle had the majority of the ball and had at least 16 chances in the second half before substitute Kris Doolan scored. They could, and probably should have won by a bigger margin, but my thoughts on Clyde weren’t negative  by any measure.

The pre-match betting had suggested Thistle would win the game by a couple of goals. I was glad I didn’t put a bet on – it would have probably been a losing one.

The drive home gave me some time to contemplate the day’s play. With the season starting in less than a fortnight, the first round of the League Cup will give me a chance to scout another couple of teams and make a final decision on any ante post bets.

Next week’s article will look at how good a side Rangers are according to my player ratings system. I’ll also provide a crash course in compiling odds and share my thoughts on where the value lies in ante post betting on the SFL.