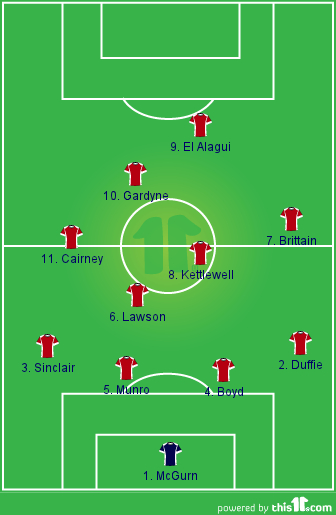 WITH the end of the footballing season already here and with the numerous player-of-the-year-type awards having been distributed in typical fashion, it is perhaps appropriate that this website offers a nominal award of its own.

This is the Team of the Season. It is, of course, made up of individuals. However, this particular team has been selected based on more than who has simply performed the best over the course of the season (have a look at the PFA team of the year in that regard)

We have tried our hardest to imagine that this team could play well together.

The players in question are selected on their own individual performances, as well as on how well they would theoretically play with the rest of the team. That is quite an un-scientific method, but it is helped by looking at smaller player-partnerships within the side.

The selected players will be discussed below, together with other candidates for the same role/position.

There might seem to be an inherent bias towards Ross County players (six selected out of 11). An unbeaten run since  August 15 2011 and a national record-breaking margin at the top of the table suggests that their team performed significantly better than the others. The number of Ross County players included reflects on how well different partnerships within the team worked.

The Rovers number 1 was, once again, in excellent form during the season. He is arguably the complete goal-keeper at First Division level. Often referred to as ‘the witch’ by Raith Rovers supporters, McGurn’s reflexes allowing him to cast the illusion of defying physics. There is rarely a week when the Raith Rovers highlights do not show an otherwise implausible save pulled off by McGurn.

McGurn’s consistently excellent standards seem even more remarkable with the knowledge that he was the only part-time player in the Rovers squad in 2011-12.

Duffie is a right-back who struck a unique partnership with forward Farid El Alagui. Duffie could call the right flank of the pitch his own for the majority of the season, with whomever playing in front of him tucking in to midfield to give him space to attack. Duffie is a similar player to Ross County’s Gary Miller, in that both are relied upon to give their team width down the flank. While Miller is probably a more accomplished ‘defender’, Duffie’s final ball was consistently better this season. He provided a number of assists to El Alagui’s 18 league goals, which earns Duffie a place in this team.

Sinclair is arguably the First Division signing of the season, having previously played for Montrose. At 6’1″, he is strong enough to prevent being bullied in the full-back position. Thistle can have no complaints about his defensive contribution to the team this season.

However, like Duffie, it is when he is attacking when he looks at his best. Sinclair has long legs, an enduring stamina and most of all a considerable willingness to get forward to support in attack. Thistle manager Jack McNamara – after experimenting with a number of formations during the season – eventually settled on a back-three system, with Sinclair given the wing-back role. As such an important player to the system, giving width on the park in attack and helping the left-most centre-back in defence, Sinclair has excelled.

Despite his later role as a wing-back in different three-man defence formations, it is in fact Sinclair’s combination with Cairney on the left flank, in a 4-4-2 system, that has consolidated his place in this team. He offers the overlap at will, letting Cairney cut in on the inside, but Sinclair can provide a rare diagonal run towards the corner of the box himself, which attracts opposing defenders towards him and away from Cairney.

Boyd has consistently been one of Ross County’s best players since their return to the First Division in 2008. When at first, he seemed a nervous, slight defender who could be harried off the ball and bullied, he is now a much more accomplished player.

Boyd’s recovery pace, with his ability to read the game, ensures that he is rarely beaten by forwards on the ground. His maturity – physiologically and psychologically – has made him almost the perfect, covering centre-back partner, to the strong man-marker. During the 2011-12 season, Boyd won his place back in the team after Ross County’s only defeat of the season. He and Munro dominated forwards for the rest of the league campaign.

It is safe to say that Munro’s experience in winning the First Division title twice previously with neighbouring Inverness Caledonian Thistle, was an important factor towards County’s own success.

While concerns can be validly raised on the centre-back’s distribution of the ball under pressure, there is no denying his man-marking ability, physical strength and positional discipline.

One fact that looks favourable on Munro is that Falkirk’s talismanic forward, Farid El Alagui, scored his only goal against Ross County when Munro was not playing. The goal arrived from a set-piece immediately following Munro’s substitution, to treat a wound inflicted by El Alagui himself.

The competition for places in this team’s midfield is pleasingly high. However, this team of the season cannot be formed without the inclusion of the title-winning captain.

Brittain is not a natural right-winger, more a functional right-sided midfielder who covers his attacking full-back and can cross well from open play. Yet, “functional” is a dis-service to Brittian, as his high work-rate married to a calm, play-making approach, makes him arguably his team’s most important player. Brittain’s character and technique is exemplified best in his hat-trick against a resurgent Ayr United in a narrow 3-2 win on a wet Wednesday night. His force of will alone would get him into this team.

Any reader of rosscountytactics.com will appreciate how crucial Paul Lawson’s form has been to his team during the recent season.

As a deep-lying play-maker, Lawson’s ability to collect the ball from defence, retain possession in midfield, switch play from one flank to another and play lofted through passes are without peer in the SFL.

Lawson’s midfield partner for Ross County and indeed this team is former amateur Stuart Kettlewell.  Kettlewell stood out to this writer in the Second Division, playing as captain for Queen’s Park in 2007 on a saturated pitch at Hampden, beating Ross County 3-2.  He has improved considerably as a player since then.

Like Boyd and Munro, Kettlewell and Lawson are a balanced partnership.  While Lawson dictates the tempo from deep, Kettlewell presses high.  Kettlewell’s all-round game has improved to the extent that he scored a number of decisive (i.e. winning or opening) goals during the season, ultimately scoring five in the league.  His goals typically came from late bursts into the box, getting beyond the striker to meet crosses or through passes.  Generally regarded as one of the fittest players in the league, his relentless harrying of opposition midfielders allows the others to play.

Such a balanced partnership can be proven statistically: Ross County have not lost a league match since January 2010 with Lawson and Kettlewell starting together.

Completing the midfield is Partick Thistle’s player of the year.  Cairney is another player from the same Queens Park team as Kettlwell. Cairney has not always been a fans’ favourite at Firhill, but by scoring 11 goals (roughly a fifth of the team’s total output) and generally providing the main creative drive to the team outwith Chris Erskine, Cairney has now endeared himself to the Jags following.

Cairney scored arguably the goal of the season, floating a chipped shot into the top corner to score at Falkirk.

The goal can be seen in motion after 2:00 mins, on Partick Thistle’s website.

Cairney has moved onto Hibernian and his strong attacking partnership on the left-side of the team will be missed by Thistle supporters.

It would be impossible to pick this team without considering El Alagui, who was in phenomenal scoring form in the first half of the season. A player who scored against every other First Division team, Farid terrorised defenders with his combination of physical strength and off-the-ball movement. His goal-scoring form dropped after January, which co-incided with his strike-partner Higginbotham’s transfer-window sale to Huddersfield. Higginbotham was never replaced in a tactial sense and Farid was often left in isolation, while Higginbotham’s replacement Willie Gibson drifted to the flanks.

Despite the drop in the number of goals scored later in the season, Farid developed a unique rapport with Falkirk supporters. He has since joined Brentford, but his presence in the SFL will not be forgotten quickly.

Although El Alagui was eventually outscored by Colin McMenamin, it is Farid’s combination play with right-back Duffie that ensures a place in this team. Duffie’s crosses were a large source of goals for Farid, who knew when and where to gamble with a run across full-backs and centre-backs towards goal.

Lastly is Dundee United-bound Gardyne, who enjoyed his best season in professional football.

Gardyne started in 30 league matches for Ross County, getting 13 goals. His goals were important to the team, of course, but it is his ability to pass and dribble between the lines of midfield and attack, making him difficult for defenders to mark, that make him a valuable player.

It should no surprise to find six Ross County players and two Falkirk players in the team. It is perhaps unfair on some Dundee players who deserve mention and praise, but there are, naturally, only eleven positions to pick from.

With many players still out of contract, we will be looking to the best players of 2012-13 with interest.