The game of the day comes at Dens Park where third place Dundee take on second place Raith Rovers. John Brown’s side are unbeaten at home in the league this season, taking 13 points from their five games and conceding just two goals. Rovers, meanwhile, are unbeaten in ten league matches since their losing to Hamilton Academical on the opening day, which is their best run since 2009.

Dundee are unbeaten in their last eight home league matches against the Rovers, winning four and drawing four. Indee, Rovers’ last league victory at Dens Park came way back in April 1995, when Take That were at number 1 with “Back For Good”. That was a crucial 2-0 success in that season’s First Division title race as they went on to win the league, finishing level on points with Dunfermline Athletic, who were also promoted. Dundee finished just a single point behind the Fife duo and would have to wait three more years to return to the top flight.

Both sides will be hoping that leaders Hamilton Academical slip up when they travel to Dumfries to take on Queen of the South. The Accies have failed to win any of their last three away matches, and have scored just once on the road since August. The Doonhamers, however, have not won any of their four home league games since beating Dundee 4-3 on the opening day of the season. Six of the last 11 matches between these teams at Palmerston have finished as draws – Queens have just two home wins over the Accies in the last decade.

Two play-off contenders clash at East End Park as Dunfermline Athletic host Stenhousemuir. The two sides have not met in Fife in the league since September 1985, when David Bowie and Mick Jagger were topping the charts with “Dancing in the Street”. The Warriors have won just three of their 33 league matches at East End Park, and their last win came way back in October 1954.

The Pars’ home record is identical to the Warriors’ away record, with both sides having won three and lost two of their five matches. It seems likely that there will be goals aplenty on Saturday, there have been an average of 4.2 goals per game at East End Park in the league this season, while Stenhousemuir have witnessed four goals per game away from home. On top of that, the meeting between the sides at Ochilview this season saw Dunfermline come from 2-4 behind to win 5-4.

At the opposite end of the table, East Fife, who currently occupy the play-off place, visit an Arbroath side who are just two points ahead of them in seventh place. Paul Sheerin’s men have not drawn any of their 11 league matches so far this season, and have tied just two of their last 32 games in the league. Willie Aitchison’s side have yet to record a win outside of Fife this season – their only away win came away to rivals Dunfermline three weeks ago. Arbroath are unbeaten in their last five games against East Fife at Gayfield.

The game of the day in League 2 sees leaders East Stirlingshire host third-placed Stirling Albion in the “not really” derby. The Shire have just four points and four goals from their last four home league games, while the Binos have not won any of their last three away matches. Saturday’s game will be the 90th meeting of the sides in national competition, and Stirling have been dominant with 51 wins to their opponents’ 19.

The tightness of this division is borne out by the fact that second placed Annan Athletic and second bottom Albion Rovers are separated by just five points. The sides meet in Coatbridge on Saturday, with Rovers hoping to end a run of four league games without a win. Annan have been in sparkling form away from home this season: they have won three league games in a row on the road and have scored a total of 14 goals in their five away league matches. Four of the last five league matches between this sides at Cliftonhill have been drawn.

“I hate you and your column last week was an absolute disgrace. But enough about that – which of the four Angus side’s has spent the longest in the top flight? And can you plot the league positions of each club throughout the history of the Scottish league?”

The first part is quite simple to answer: only one of the four clubs has ever made it to the top flight of Scottish football. Arbroath have spent a total of nine seasons in the top tier – four years in the late thirties, a single season in each of the fifties and sixties and then a run of three seasons in the early seventies. Their highest finish was 11th place (out of 20) in 1935-36 and again in 1937-38.

Another fact on the Angus clubs: among them they have finished rock bottom of the Scottish League system 27 times. Brechin City have more “wooden spoons” than any other club in Scotland, having finished dead last on 12 occasions, while Arbroath have six, Montrose have five and Forfar have four.

Finally, here’s the graph I was asked for, which shows where the four sides have finished over the years. Note that the league finishes plotted are the clubs’ overall positions in the Scottish League system, so Brechin’s third placed finish in last season’s Division Two is recorded as a 25th placed finish overall (since there were 12 SPL and ten Division One clubs ahead of them).

Each of the four clubs are displayed using their traditional colours: Arbroath in maroon, Brechin in red, Forfar in light blue and Montrose in dark blue. 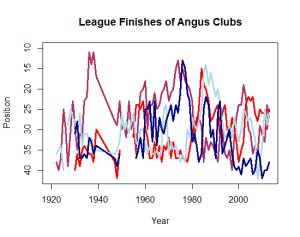 If you are curious about any team-specific stats or records, e-mail us at mail@tellhimhespele.com or tweet Craig at @SPLStats and he will pick out the most interesting questions – there will be no Stat Attack! column for another fortnight, so there is ample time for you to burden us with your burning issues.