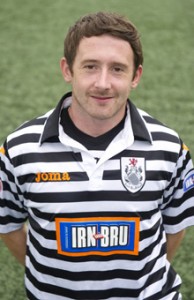 QUEEN’S PARK consolidated first place in the Third Division following a creditable draw with Annan Athletic at Hampden Park on Saturday. Graeme Ramage seized upon uncertain defending to give the visitors the lead before Lawrence Shankland equalised with a fine close range shot. Shankland added his second at the beginning of the second half with a crisp finish to put QP in front, but Michael McGowan’s deflected drive on 70 minutes ensured a stalemate between the teams.

The match was stuffy, attritional and not in keeping with Queen’s Park’s traditional style; beyond the goals, there were actually very few talking points. While the majority of the praise will fall on 17-year-old Shankland after he scored his eighth and ninth goals of the season, it was perhaps the quietly effective performance of QP midfielder David Anderson which deserved the highest acclaim.

Anderson joined Queen’s Park in the summer of 2010 from Kilbirnie Ladeside where the 29-year-old had spent the majority of his career. Since his transfer, the diminutive midfielder has blossomed into one of the finest players in the Third Division and has managed the transition between Junior and senior football with ease. His strong performances last season were central to the Spiders’ remarkable league campaign which could – and possibly should – have ended with the club’s promotion to the third tier.

The player has continued his good form from last term but since the departure of Martin McBride in the summer, a greater burden has been passed onto him. McBride and Anderson’s styles complemented each other well and the pair were arguably equal in terms of ability; their classy approach play made Queen’s Park the most attractive side in the Third Division last year. Michael Keenan has been drafted in from Arthurlie to partner Anderson, but he lacks McBride’s craft and intelligence – his qualities as a midfielder are physical and his presence is little more than a destructive one.

In some ways, this directly impacts on Anderson’s style of play. Manager Gardiner Spiers nominally arranges his team into a 4-3-3 system, but with midfielder Jamie Longworth pushed so far up the pitch to the extent that he almost plays as an auxiliary attacker, Queen’s Park can sometimes appear to play using a 4-2-4 formation when in attack; to give the side balance, Anderson and Keenan often act as restrained, orthodox midfielders, even if the former is capable of performing as a box-to-box midfielder.

Against Annan on Saturday, Anderson spent large parts of the match almost exclusively sitting in front of Jamie Brough and Ricky Little, operating as both a defensive screen and his team’s playmaker-in-chief. The majority of Queen’s Park’s play was directed through the midfielder and his short, unfussy passing was the link between defence and attack. Spiers favours pushing his full-backs as high up the pitch as possible and most of Anderson’s passes played Peter Bradley or Paul Gallacher into attacking positions.

When the player was unbound from his defensive responsibilities, Queen’s Park looked at their most threatening. Anderson is a fine dribbler who marries neat close control to deceptive pace and his adventurous running indirectly led to his side’s equaliser. On 37 minutes, he instigated a neat give-and-go with Gallacher before driving at the Annan defence. He clipped a neat pass to Sean Burns on the right flank, and Burns’s drilled centre was controlled by Shankland; the youngster finished adroitly from close range.

When his side are in possession, Anderson will always make himself available to collect the ball. On numerous occasions against Annan, he would drift into the pockets of space between the opposition midfield to receive a pass – it was interesting to note that when he received the ball, the full-back closest to him would begin to maraud up the pitch into an offensive position. When Queen’s Park lost the ball, the player would immediately retreat to the space in front of his defence. There could only be one criticism of Anderson’s general play on Saturday: his tackling. There were at least two occasions when he slid in to win the ball, only for the opposition to deftly waltz around his outstretched leg.

David Anderson is certainly capable at playing at a level beyond the Third Division and could easily assimilate into the majority of sides in Division Two – the gap between the leagues is not insurmountable and the player could make the transition with minimum fuss. However, if Queen’s Park fail to win promotion, it seems unlikely he has the desire to leave – Anderson is content at the club and appears to relish his role and responsibility within the team.