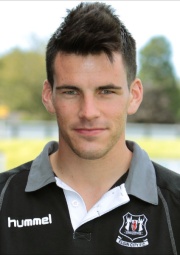 THIS report was meant to have been prepared a month ago, when Elgin City’s left-winger Daniel “Danny” Moore scored the second in a 6-1 rout over Montrose directly from a swerved corner kick. Circumstance got in the way of attending the match, but this was arguably a blessing – Elgin’s most recent win over Berwick was a more challenging fixture and arguably a better indicator of Moore’s ability. The former Ross County and Peterhead player might have only contributed one direct assist of the three goals, but he was central to almost every good play that City created.

Moore began the match on the left side of a fairly orthodox 4-4-2 formation, which was matched by Berwick’s own 4-4-2. To an extent, the tactics and range of formations shown throughout the SFL have varied little since the 4-4-2 revolution across the sport in the late sixties, but that is of particular benefit to Moore as he has been able to make his role in the team indispensable.

Even when contemporary football continues to use variations of 4-4-2, there is an inherent distrust in wingers in their most true sense: to hug the touch-line, to beat the full-back, and to deliver crosses to two other forwards consistently. As better diet and training methods have developed over the decades, there is more athleticism found in teams in general but specifically from full-backs. This has had a two-fold effect: firstly, wingers no longer tend to have the upper hand on defenders in terms of beating them for pace from a stationary position, and secondly, it is the attacking team’s own full-backs (who have the room to accelerate from using the overlap) that are now more typically being relied upon to provide a team’s width.

Thus, Ross County’s title-winning side of 2011-12 used a 4-4-1-1, with four central midfielders spread across the park. This season’s Partick Thistle side rely on their full-backs for width (although Stephen O’Donnell, a wide midfielder turned full-back started in midfield again against Dunfermline at the weekend, at least partly as a strategy to attack a weak left-back). Dunfermline Athletic themselves have often resorted to keeping arguably the SFL’s best winger Joe Cardle on the bench to solidify their midfield base. Today, Greenock Morton under Allan Moore are one of the last teams to consistently use dual wingers (with all of the numerical disadvantages in central midfield that entails). Even Stevie Murray, formerly of Partick Thistle, Dumbarton and latterly Stenhousemuir retired at the age of 29, possibly down to the lack of match time available to him in his role as a specialised winger.

It is therefore of pleasant relief to find a player like Daniel Moore playing in a team whose attacking systems are built around his attributes. Playing high up the pitch to impose himself on the opposing full-back rather than confront himself directly against Berwick’s wide midfielder, Moore was the obvious out-ball to his team from the very start of the match onwards. The aim for his manager Ross Jack would have been to isolate the full-back and allow Moore to lay chances on to Craig Gunn and Stuart Leslie. In effect, the team did not always get the ball early enough to Moore to take on the disconnected marker, but nonetheless enjoyed a productive afternoon and grew into the game after a subdued start.

Although Moore was involved in the match early on, he did not have a telling influence for the first quarter. His first attempt at beating Berwick’s right-back Devon Jacobs was a slow dribble that allowed right-midfielder Ross Gray back to defend in a one-on-two. Moore’s first spell on the left flank in open play did not provide any clear-cut chances, but even then his delivery from set-pieces was dangerous. The player picked out Jamie Duff on the edge of the penalty area with an out-swinging corner kick which Duff volleyed goalwards, only to see the ball cleared off the goal-line.

Moore soon took a couple of in-swinging corners from the right flank and stayed there, with City’s Brian Cameron (naturally a central midfielder) switching to the left to act as a counter-balancing ballast to Moore’s gusts forward (there were times when City were reminiscent of Newcastle and sometimes the England national side in the late eighties, when Chris Waddle was used as a roaming winger to supply two forwards, supported by three central-ish midfielders).

Playing on the right flank threatened to expose some of Moore’s weaknesses as a forward. As a “chalk-on-the-boots” style winger who looks to stretch the pitch as much as possible, playing on the right did not seem to suit him. Moore attacked the bye-line with the same enthusiasm as he did on the left, but it was relatively easy for Berwick’s left-back Dean Hoskins to show Moore on to his less strong right foot, which resulted in non-threatening crosses. In addition, there were times where Moore could have attacked the open space at the far post when the ball was on the other side, but he followed his natural instinct to stay on the edge of the box where he was less likely to make a contribution from a cross ball to him.

Moore did not link up with his supporting full-back particularly well (on either flank), certainly not as fluently as Cameron and City right-back Graeme Beveridge. At no point in the match did Moore allow his full-back to overlap him, which might not always be the obvious choice when a winger has the ball, but the overlap would have been especially useful on the right flank  – it would have allowed him to cut inside with the ball on the diagonal and drive towards goal (much as he did shortly before half-time from the left flank, but the acute angle from the left foot allowed the goal-keeper to parry the low shot). With some more variety in his play, Moore can be an excellent “inverted” winger on the right side.

However, it was reverting back to the left which brought Moore’s most telling contribution to the match after 25 minutes. Almost immediately after the switch, he found room to run with the ball at Steven Notman and Jacobs from the half-way line. Having gathered momentum in his dribble, Moore glided past the double mark to get to the outside-left corner of the penalty box. He lifted his head and carefully rolled a low, angled pass to the far post where Stuart Leslie tapped the ball in to the goal for 2-1.

Ten minutes later, after a couple of changes from side to side, Moore had the beating of Jacobs on the left again, having showed strength and speed to get to the bye-line – his cross from that position arced beautifully over the goal-keeper Bejaoui’s head towards Leslie at the back post, but the ball was headed clear. Later, a promising counter-attack on City’s left brought a yellow card to Hoskins (who was out of position from a set-piece) for a professional foul on Moore.

As the second half wore on and with Elgin still winning by a goal, it was interesting to see how Moore dealt with the Wee Gers’ taking the game to the home team. On around 57 minutes, Hoskins should have done better with a sliced shot off-target from 20 yards when there was time to compose himself, but it was Moore staying forward on that occasion that allowed the chance to arrive. Otherwise, he made a couple of interceptions in his own half late in the second period to set up counter attacks – his defensive contribution was outstanding in the context of his role in the team (as a de facto third forward). As space opened up on each flank and players’ stamina became relevant, Moore increasingly looked an asset to his team.

Overall, it was a good game for Daniel Moore. Technically, his crossing and shooting is way above average for the Third Division. As a personal trainer during the week, long-term fitness will not be an issue, major injuries notwithstanding. Having recently turned 24, he still has time to show that he can take a step up a division or two. An increase in creative responsibility on him (in open play and from dead balls) has brought its rewards, with Elgin comfortably sitting in second place in the league and having scored the most goals.

Is he worth taking a gamble on? Definitely. Every squad in the country needs a specialist winger to change the pattern of a match, and Moore is as able a specialist as they come.