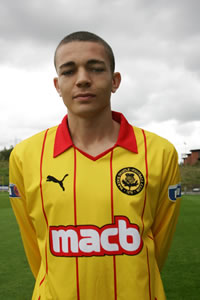 THERE was a period earlier in the season when Aaron Sinclair could not find a way into Partick Thistle’s team. Thistle began the campaign with converted midfielder Stuart Bannigan at left-back and won seven games in a row. Sinclair had a distinguished first season at Firhill in 2011-12, finding his way into the PFA team of the season (as well as our own) and on the rare occasion that he was not available, Stuart Bannigan – for some a forgotten man at Firhill despite a promising start to his career at the base of midfield – was asked to deputised.

Bannigan replaced Sinclair well enough that manager Jackie McNamara offered Bannigan the chance to play at left-back at the start of the season. It was only an injury before an important fixture at home to Dunfermline Athletic which gave Sinclair the opportunity to reclaim his role in the first XI, but he has since started nine successive games in the league.

It could not be said that Thistle’s left-back had a direct impact on the match – as a full-back, he played a typical supporting role to the midfield and maintained his place in the line of defence as expected. Sinclair did not score any goals, nor did he have any direct assists, but that is entirely normal for a player who is nominally a defender. However, he was essential in providing the balance between providing physical assistance in defence and having the prospect of penetrating width further up the pitch.

Sinclair started this game on the left-hand side of defence in a 4-2-3-1 formation, which morphed into a 4-4-1-1 in the second half. In the first, Sinclair was directly against Falkirk’s Blair Alston, although he often drifted infield and the Bairns’ second forward Thomas Grant would fill the space in front of Sinclair. In the second, Falkirk depended on right-back Kieran Duffie for width, and Sinclair enjoyed a fascinating contest against one of last season’s outstanding full-backs.

It is the sense of progress when observing Sinclair which makes him so compelling to watch and successful within the team. Whether it is by accelarating through a wall-pass with Forbes or another, or by beating a player alone by using his signature “chop” to change the angle of his momentum, Sinclair’s play comes to life in the final third of the pitch. He has enough running power to beat his marker on the outside of the pitch, but he also has the confidence to take a player on the inside – that is enough for a defender to deal with against a specialist winger, let alone an over-lapping full-back.

Sinclair appears very athletic in all respects. He is rarely beaten in the air, winning all of his aerial contests in open play against Falkirk. Physical power is of course a useful and obvious strength to have as a full-back, but most importantly, Sinclair can make his presence count in set-pieces. He scored earlier in the season with a header from a corner kick and almost always gets into the box when an indirect free-kick or corner kick allows. In defence, when defending corners and set-pieces, Sinclair takes top responsibility in marking the opponents’ danger men – one moment shortly before half-time saw Sinclair capably mark Falkirk centre-forward Lyle Taylor at a free-kick, and then centre-back Ryan McGeever (possibly Falkirk’s tallest player) at the subsequent corner-kick. This will always be good news for Sinclair’s manager, because it allows the other defenders to manage other physical threats – Thistle therefore look more likely to concede from open play than at set-pieces (at least now that Scott Fox has returned in goals).

Unsurprisingly for an attacking full-back, Sinclair has a strong shot and can be a threat from range. In this match, Sinclair was uncontested in claiming the ball for a long range free-kick which dipped just over the bar – he has only scored one free-kick in the league since joining Thistle but if the technique shown for his goal last season is anything to go by, there are more goals to be had by giving him responsibility.

It is obvious that Sinclair is a team player, who, when caught out of position further forward, will either sprint to recover his place in the defensive line or will harry the opponent in possession if close to him. Managers and supporters alike might take the recovery for granted, but having a full-back make a half-hearted attempt to find his position in defence can be as disastrous as a midfielder losing possession in front of the penalty box. On the ball, he is always looking to work passing triangles with his team-mates – he struck a rapport with playmaker Ross Forbes in particular during the match but Steven Lawless and later Sean Welsh combined with the left-back in tight spaces to progress the ball further up the park. When the ball is on the other side of the pitch and Sinclair has a promising amount of space to attack into, he is not shy in screaming for the ball to quickly be turned over to his flank.

In the 4-2-3-1, Sinclair was well covered by Hugh Murray as part of a double-pivot in central midfield with Paul Paton. Murray has his critics for occasional sloppy passing and for the occasional rash tackle, but tactically he is an unsung hero. In allowing others to play-make and take the game to the opposition, Murray is contented in blocking passing lanes and covering space for attacking full-backs – this makes Sinclair’s role in the team that much easier. Murray has not played much football recently but when Stephen O’Donnell returns to the right-back position, having someone of Murray’s positional awareness will be important in allowing the full-backs to get forward in unison. Indeed, Thistle can often resemble a 3-5-2 formation (although not in this particular match) and Sinclair’s endurance and skill-set is equally compatible as a wing-back as it is as a full-back.

Sinclair’s most obvious weakness must be that his attacking instincts can leave him caught out of position – a quick counter-attack can leave Thistle’s left flank exposed. Falkirk scored their equaliser from him being further up park when Thistle were dispossessed at the half-way line and the centre-backs were left in a two-on-three situation, with Thomas Grant assisting the goal from Sinclair’s position. This was not a moment in isolation: Sinclair was drawn towards the ball on his side of the pitch between defence and midfield (an occurrence sometimes symptomatic of the 4-2-3-1 system), which allowed Grant in behind him again. At the beginning of the second half, Falkirk should have equalised as Jay Fulton split the defence open from 40 yards out, angling a diagonal pass behind Sinclair’s blind side for Duffie to square to a misfiring Taylor. If Sinclair is to step up a level – and he is certainly deserving of doing so – then he will need to work on these moments of lost concentration.

Overall, this was an encouraging if not spectacular performance. Sinclair played a supporting role to the headline-makers in the team, but his pace and strength on the flank and at set-pieces are essential for McNamara’s vision for the team. His skills are arguably transferable to any level of football – if he can improve on his defence in open play, then Sinclair could develop into one of Scotland’s best left-backs.